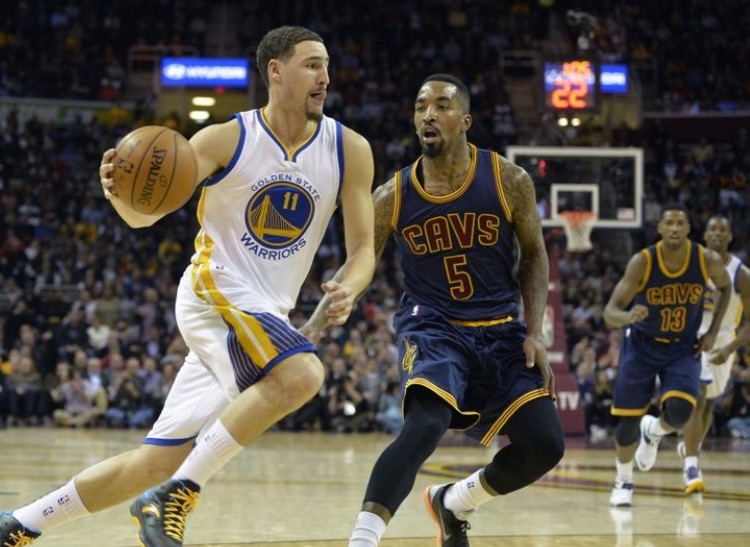 Preview Kyrie, Kyrie, Kyrie! Mr. Irving had the best performance of his young career in the biggest game since he’sentered the league. During pregame I Was on the phone with a friend that pointed out Kyrie seemed like he
was on the court forever before Game 3 warming up.

I took a small note and then went back to the top of the pregame to see how long he shot around. Kyrie was the first Cav out on the floor and last to go in the locker room. He warmed up for 75mins straight. And boy, did it carryover!
Irving scored or assisted on Cleveland’s first 3 of 4 baskets and that set the tone for the night. Kyrie Would dominate the opening period with 7 of 9 shooting from the field, 2-2 from deep, 3 assist and a board. No turnovers and drew an early foul on Steph to put Curry in early foul trouble.

He wasn’t alone though. The King also came to play early. LeBron didn’t miss a shot in the 1st and overall presence was apparent from tip to buzzer. He rebounded, dove, was aggressive going to the rack early, forced turnovers and most importantly lead his team’s energy throughout. His night was highlightby a 3rd quarter alley that shook thebuilding and basiclly put Clevelandin cruise control.
Even though the King had a greatoffensive performance minus the 2nd Quarter, LeBron James true impact was really felt on defense. He shutdown Draymond Green from the beginning. Draymond was ineffective the entire night shooting 2 for 8 finishing with only 6 points. Green did have 7 assist and rebounds but they were meaningless.

When Draymond struggles Golden St. does too. The Splash Bros have to hit their open shots to create space for others. The bench for the Dubs played well again but Klay and Steph have to score around 50 combined on the road for this team to be successful. Barnes, Livingston and Barbosa have combined to shoot 65% a game so far dropping 32 a night between the trio.

Shaun Livingston is shooting 76% by himself, he has to be more assertive as well. Cleveland’s Keys toVictory 1. Limit Love’s time on Draymond and the floor. He has to play but cross match him on defense so he can check Barnes half his mins on the floor and post him on offense. No More than 20 mins of Love.Lol.

My man J.R. Smith has to show up again like he did in Game 3. Aggressive, Alert and Accurate Smith contiuned to play steller
defense in addition to making five 3’s on his way to scoring 20. If he can continue his defensive play with quality shooting…Game On. 3..Kyrie, LeBron and Richard Jefferson Game 3…Ditto

Game 4 Golden St Keys to Victory
1. Steph and Klay have to get at least 50 combined tonight. Don’t get caught up in the long ball. Drive the lane, get to the stripe and put it onthe floor and then pull up mid range but let the 3 ball rhythm comenaturally. Klay just has to keepshooting eventually the shots will fall. Steph has to wake up and put up more shots. 2. Pick up the pace off of missed shots and move the ball when in a set offense early in the shot clock. Cleveland is locked in on defense. The longer GS waits to start their offense on the 24, the harder theshots will get and the more chancewe see a Game 3 repeat. 3. Draymond attack the rim and that will lead to everyone on the Warriors to be more assertive and that will lead to free throws.
This the one. I believe tonight Curry finds a groove. James will make his imprint but Kyrie has to lead the way again on offense. Maybe too much for Irving to handle. Steph, Dray, Klay, and the crew knows what it takes.