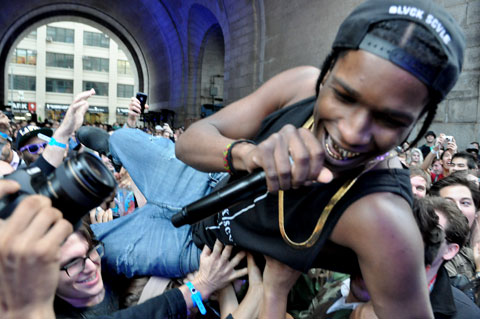 What is going on with A$AP Rocky these days? The F**cking Problems rapper is facing an assault charge by a female fan who claims he got violent with her at this weekend’s Made in America concert in Philadelphia. SMH

According to reports, the alleged victim filed a criminal complaint with the District Attorney’s Office, insisting the rapper slapped her in the face while “trying to make his way through a crowd of dancing fans.” (Sounds like it could’ve been an accident)

In the legal documents, the young mom said she suffered whiplash from the open-hand slap. In response, the D.A.’s office decided to charge the Harlem MC with misdemeanor simple assault. (Seems a little far-fetched. People today will do anything for fame.)

However, this isn’t the first time A$AP has gotten physical with a concert goer. During a show in Sydney, Australia earlier this summer, video footage shows A$AP slapping a fan after she tapped him on the head and blew him a kiss.