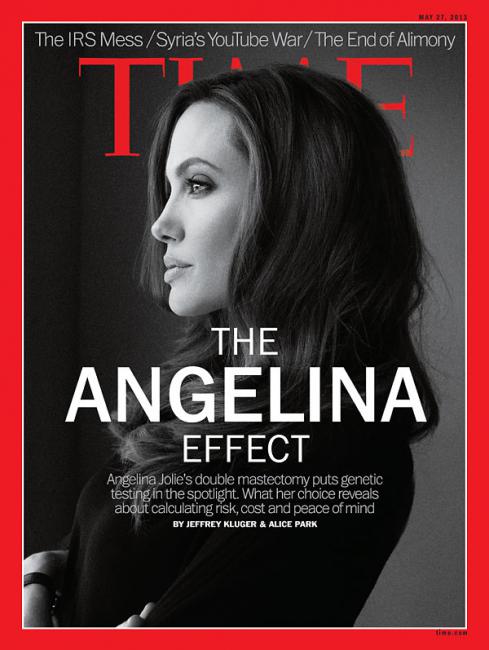 Time magazine reports on actress Angelina Jolie’s double mastectomy and how she is bringing awareness to genetic testing.

Jolie, by nearly universal agreement, made the right choice for her. She tested positive for the breast-cancer-related BRCA1 gene, putting the probability that she would develop the disease at a terrifying 87%; after her surgery, her doctors put that number at just 5%. But a lot of experts worry that we may overread the lessons. Genetic screening is a young science, and while we may have detected genes linked to a host of ills — Alzheimer’s disease, prostate cancer, rheumatoid arthritis, diabetes, heart disease — we often do a terrible job of calculating our resulting risks. Just over one-tenth of 1% of all women carry the same BRCA mutation Jolie has, and yet doctors expect a stampede of women requesting the test. In the U.S., 36% of women who test positive opt for preventive mastectomy, but some doctors argue that regular MRIs and other screening tests may be sufficient to detect the disease, and that less radical procedures, like lumpectomies, may be sufficient to treat it if it does occur.

Previous « Black Scale x The Cuts COMME des F**KDOWN “Everything Is Purple” Collection
Next Baby No.2 For Beyonce & Jay-Z? »