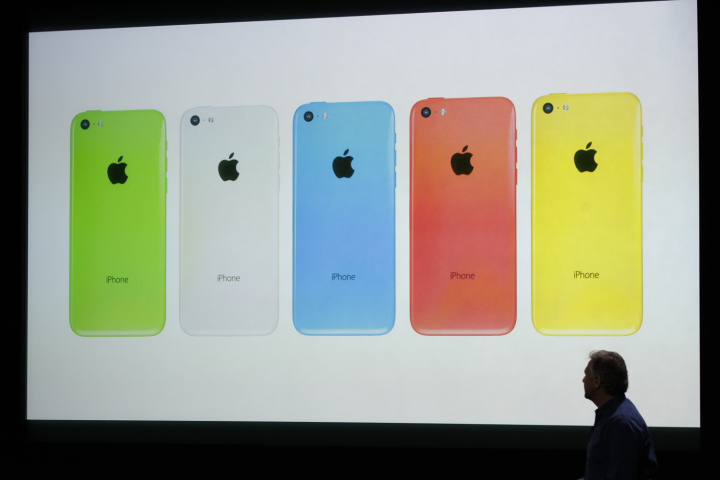 Apple chief executive officer Tim Cook started off by saying, “In the past, when we’ve launched a new iPhone, we lowered the cost of the old iPhone, making it more accessible to new people. But this year, we’re not going to do that.”

Instead, Apple introduced a lower-cost iPhone 5C alongside the iPhone 5S — the company’s flagship smartphone.

Apple senior vice president Phil Schiller took the stage to announce the iPhone 5C. The new device is made of plastic and has a 4-inch display. It has a hard-coated polycarbonate design, is steel reinforced and has a multi-band antenna. It comes in five colors: green, white, blue, red, and yellow.

The iPhone 5S has a 4-inch display and comes in black, silver and gold. The hardware has been upgraded to an A7 chip, and is the first smartphone to be 64-bits.

“The PC world made the transition from 32 bit to 64 bit and it took years. Today you’re going to see that Apple is going to do it on one day,” Schiller said.

The iPhone’s camera is getting a major upgrade. Apple is increasing the pixels to 1.5u to capture more light. The camera will also autodetect white balance as soon as the app is launched, and include burst mode and true tone flash.

Just as the rumors suggested, the new iPhone will include Touch ID — a fingerprint sensor built into the home button. The sensor scans sub-epidermal skin layers and will have 360-degree readability. It is about 170 microns thin, with 500 ppi resolution. The fingerprint sensor can be used to unlock the iPhone or make purchases.

“Your fingerprint is one of the best passes in the world. It’s always with you, and no two are exactly alike,” Apple senior vice president Jony Ive said in a promotional video.

Apple also announced details of its completely redesigned mobile operating system, iOS 7, that will be ready for download on Sept. 18.