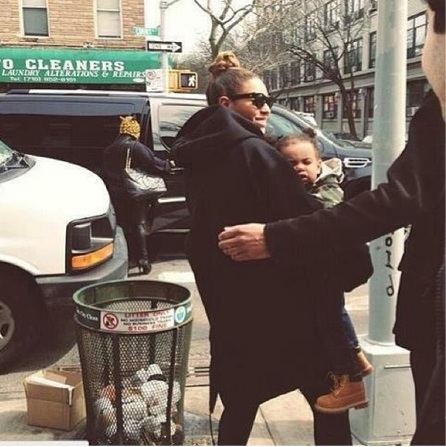 This past weekend, Beyoncé was in “I’m a normal mommy” mode as she stopped by her favorite Brooklyn eatery, Buttermilk Channel bistro, with her daughter.

A few fans who were there, snapped a picture.  Beyonce sat at a very small table in the back for her lunch date with Blue Ivy, who was dressed in Timberland boots and rocking two cute pigtails.  Once again, this is showing just how much celebs like Bey live normal lives off cameras and spotlights. Still believe she has six nannies?

Mathew Knowles recently spoke out on the infamous rift that caused his business relationship with Beyonce to come to an end.  He told The Sun:

I’ve never revealed this much in an interview before.

Normally I hate to talk about anything personal, but it would be a lie if I did not say it has been difficult.

This was not a normal ending of a business agreement. This was a dad and a daughter and it was incredibly painful and it had some difficulties. But I try to always have a positive mind about things and you got to do it the right way.