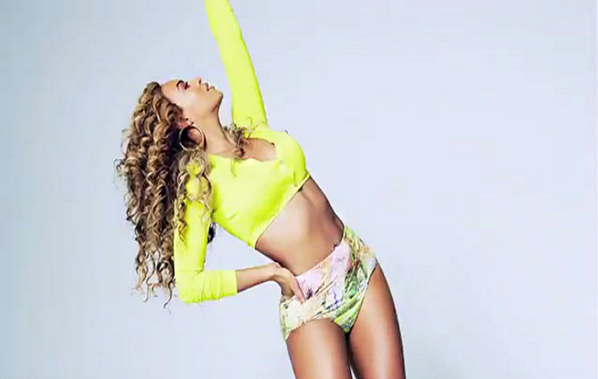 Here are two images from Beyonce’s upcoming feature for the April 2013 issue of Shape magazine.

“Talking about weight can be a very touchy subject for women,” according to Shape magazine editor-in-chief, Tara Kraft (and, well, millions of other moms out there), but someone has to do it.

Who better than one of the 100 sexiest women of the 21 Century herself? Beyonce Knowles.

Shape’s April 2013 issue features Knowles, who Kraft says is bravely willing to go where few women have gone — talking about weight — “because she wanted to make every woman out there feel like they, too, could achieve what she did.”

Beyonce had this to say in the feature:

“I gained 57 pounds when I was pregnant. I didn’t have a lot of time to lose the weight, because I scheduled a show three months after I gave birth, which I would never do again,” Knowles says in the minute-and-a-half video clip. “I’m not a person that is naturally very thin. I am a person that has to work at keeping my body in shape,” she goes on to say, adding that dance is what keeps her active.

Add cardio, lunges, and a diet full of veggies and lean meat to that, according to Shape editor-at-large, Bahar Takhtehchian, who revealed to The Insider last year what Beyoncé’s post-baby fitness routine consisted of. Trainer Marco Borges said it’sone vegan meal a day that has helped Bey keep her nearly 60 pound weight gain at bay.