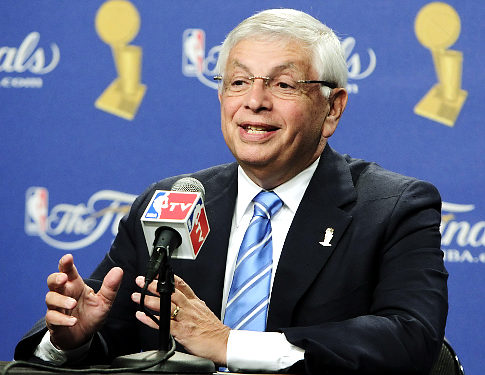 Today is the maturation of a career long effort by David Stern to take the NBA from an after thought to the fore fronts of the American sporting landscape. His 28 year tenure as commissioner has been as successful as any commissioner in any sport, excluding maybe Pete Rozelle and Paul Tagliabue. Since working under Larry O’Brien, Stern has been considered a pioneer for the NBA being credited for the push of the richest tv contracts the association has ever seen. Those contracts lead to the live showings of the NBA postseason we enjoy today.

His first season(1984-85) as commissioner saw such stars as Jordan, Olajuwon, Barkley and Stockton enter the league. Jordan being his cash cow he refocused his energy on promoting the stars of the games instead of the teams, a philosophy that has set the NBA apart from the other three major sports in America. Jordan lead the way for this theory providing the persona that attracted commercial and shoe deals galore from the media and retail circuit. Magic vs Bird though was the rivalry the NBA rode out of obscurity.

This infamous matchup would bring the Association to unparalleled heights. Three finals’ battles in of four seasons between the Lakers and Celtics transcended the sport into the main stay in the public it is today. Seen with the success of recent meetings between Celtics vs Lakers the fruits of those labors can all be traced to Stern.

Stern may be the king of the lockout and dress code but his changes of the names of the most notable awards of the Association and starting 7 new franchises will forever add to his legacy. Also added to his list is the efforts of taking the game international, starting the WNBA and NBDL.

So tonite when you’re going to a Finals party, pulling out a brew and routing for one of the titans, take a minute to reflect on David Stern’s contributions taking center stage.