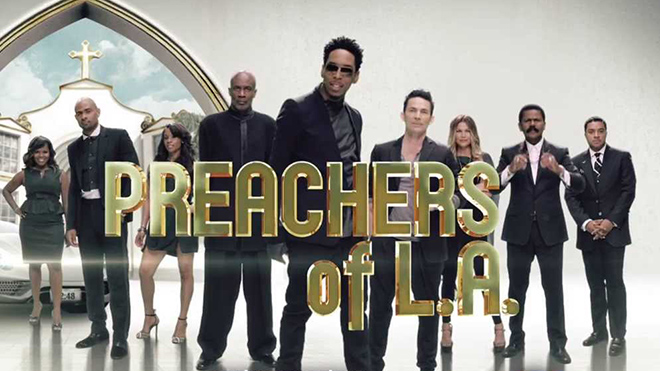 The new reality show Preachers of L.A. on the Oxygen network was supposed to shine a positive light and show how these very well known pastors live their lives outside of the pulpit. But of course, you can’t please everyone. The show features  Bishop Noel Jones, Deitrick Haddon, Bishop Clarence McClendon, Pastor Wayne  Chaney, Bishop Ron Gibson, and Pastor Jay Haizlip as men og God who has fallen sshort of God’s glory in some way or another. It aslo shows them riding around in Bentleys, wearing expensive designer suits and  living in multimillion dollar homes  while  doing the Lord’s work. As some of the leaders of “prosperity preaching,” their  message is that all it takes is faith, positive thoughts and speech, and  making  sure you regularly tithe and donate to the ministry in order for God to  bless  you financially.

Bishop T.D. Jakes is one of those nay-sayers who are so against the show. On Sunday, while he was asking for his congregation to donate to his ministry,  he  made sure to rebuke the show and all it stands for.

“Now, I know you been watching that junk on TV. I want to tell you right now,  not one dime of what you’re sowing right now will buy my suit. I want you to  know my car is paid for. I want you to know I got my house on my own. I want  you  to know I’m not bling-blinging. I am not shake and bake. I had money when I  came  to Dallas and I plan to have some  when I  leave. You did not buy what I got. I had it when I came here. You know  I had it when I came here. The  devil is a  lie! I have sold enough books and produced enough movies. I  don’t need your  offering to pay for this little slimy suit. So I rebuke that  spirit in the name  of Jesus Christ.”

Aside from the flashy cars, mansions and jewelry, many people have also  criticized the show” star Deitrick Haddon, who last year announced that he was  divorcing his wife of 15 years, and shortly after that, got his girlfriend  Dominique Mctyer pregnant. They have a 1-year-old daughter  together and just got married back in August.

Meanwhile, although T.D. Jakes is not amused, famed gospel singer Fred  Hammond took to Twitter to defend Preachers of L.A., while saying that  the same people who are criticizing these pastors, are in front of their TVs,  celebrating Scandal on Thursday nights:

“I heard an interesting observation that’s extremely true. Because Soooo many  ppl are up in arms about this tv show. Great point @TWH_PhD I wonder how many  ppl who watched #PreachersOfLA & displeased with it, will be watch’n & celebrating Scandal 2night?

When I was in commissioned I almost gave up because I felt like my issues  were to much. But a really great pastor took the time and care to be  transparent & showed me his faults, struggles. I woulda never thought he had  stuff. He  didn’t glory in it but his transparency brought Christ closer. For a  minute his  humanity stood in front of his divinity & I needed that. He said  Fred if I  can make it you can. From that point I felt the faith & courage  to press on,  went on to write the Spirit of David. And The project after that  produced a song  called “please don’t pass me by.” All BC he blessed me with an  insight of his  press.

Music has been my reality show. My songs came from real episodes in my life,  like “running back to You”. What if I was to ashamed to  share? The game is stepping up family from audio to film. The folks  that’s already saved and got they stuff together have no real need of POLA. But  these are the last days & GOD is going after some hard core lost souls. And  He will use what ever method He chooses to get  them

What’s your take on the show?

Previous « Rihanna & MForde Are Back Together
Next Nicki Minaj To Add Pasties To Her Spring 2014 Collection? »