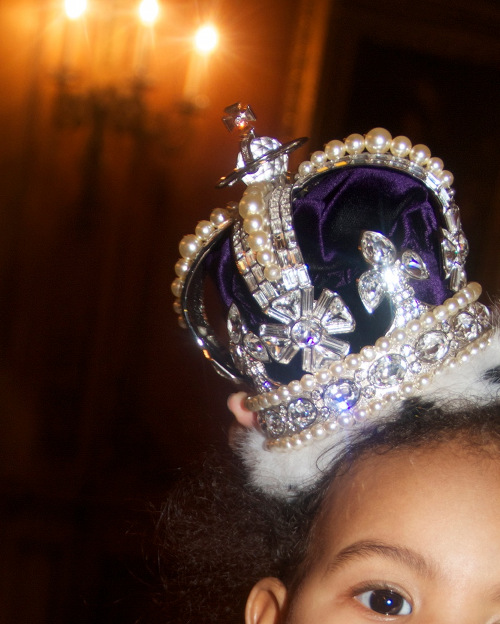 Blue Ivy Carter, heiress to Hip Hops royal couple “The Carters”, is one of the most talked about babies everytime a picture is surfaced.

The beyhive made a big buzz when King Bey posts picture of Blue Ivy Carter (B.I.C) to her tumblr, and she recently posted a picture of B.I.C wearing a royal crown with her little eye poking in the picture. Along with some other very cute pictures.

Above: from her suite at Summer Jam XX a few weeks ago.

Above: BTS of her Vogue shoot…So cute!

Mathew Knowles plans to take a British tabloid to court after it printed what he called a mispresentation of his relationship with Beyonce and Blue Ivy.

Music World owner Mathew Knowles is getting ready to go to court now that he’s suiting THE SUN, a UK tabloid for “knowingly and maliciously misrepresented [his] relationship with his daughter, Beyoncé, and with his granddaughter.”

In case you missed it, a salacious interview was printed in The Sun that painted the relationship between Beyonce and Mathew as “tense” and even insinuated that he had not met his granddaughter Blue Ivy.  Of course, it came to light that Mathew had indeed met Blue Ivy once we saw Beyonce’s HBO documentary, Life Is But A Dream aired.  And now, Mathew is suing for unspecified damages, defamation and breach of contract. In a statement to E! News he said,

“My daughters and my family mean the world to me,” he said. “The barrage of repeated falsehoods spawned by the British Sun’s defamatory article has been exhausting and personally damaging to me. No matter how many papers it sells or web hits it generates, The Sun, like any newspaper, needs to maintain a basic level of journalistic integrity. The Sun crossed the line when it went after my family. The Sun needs to be held responsible for its lies in a court of law. This happens too often to too many people, and it is simply unfair.”

News Corp., the owner of The Sun, has not responded to the lawsuit.