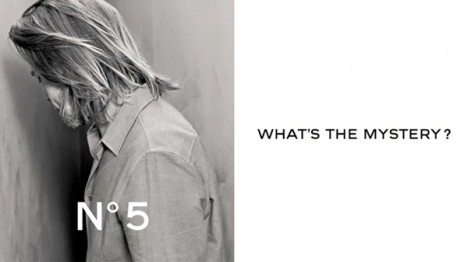 Check out these new videos below teasing Brad Pitt‘s campaign for Chanel No. 5.

Brad Pitt, announced in May as the first ever male face of the famous Chanel No. 5 parfum, will debut this fall in a new film and print campaign.

With a short film called “Inside Chanel,” a cut and paste history of Chanel No. 5, the famed Parisian house has announced that a new advertising campaign with Hollywood megastar Brad Pitt will be unveiled on October 15, alongside a new commercial featuring the star, shot by Atonement director Joe Wright.

Joe Wright, who has been at work on Anna Karenina with Keira Knightley, filmed the commercial, which sees Pitt addressing the camera directly as if talking to a woman.

The last Chanel No. 5 film was directed by Amélie creator Jean-Pierre Jeunet, who teamed up with his former leading lady Audrey Tautou for a retro extravaganza set on the Orient Express. The same year, Tautou starred as Miss Chanel in the feature film Coco Before Chanel.

Chanel No 5 was launched by French designer Coco Chanel in 1922. Other faces of Chanel No. 5 include Catherine Deneuve, Nicole Kidman and Estella Warren.

Carole Bouquet, the French actress and fashion model, also made her name as Chanel figurehead in a series of commercials filmed by Ridley Scott.