Chris Brown and Rihanna, Together No More? 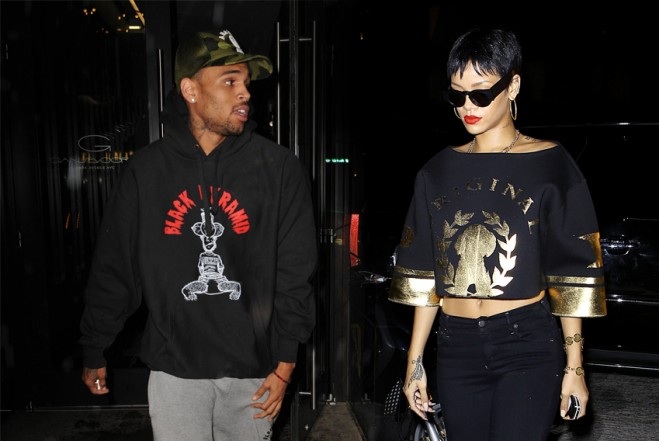 According to E! News Chrianna are finito. However, Chris recently revealed that he’d rather keep his relationship private for now on so that people will focus on his music, some folks were chattering because this weekend when Chris decided to party it up all weekend without Rihanna who was in LA for her “Diamonds” tour. (Maybe she was busy #purpshrug)

According to E! Online:

A source exclusive to E! News has confirmed the couple split after a tireless frenzy of are-they-or-aren’t-they tailchasing. Per the insider, RiRi will always love Chris but has moved on and is reshifting her focus to her career and business ventures.Currently running the final legs of her international Diamonds tour while spending solo time with her “mini tour family” and conceptualizing new creative ideas for future shows, the superstar is also working toward launching a new perfume and continuing with her ongoing fashion campaigns.

There’s a big possibility, considering Chris hesitated to answer a few questions in an interview with Big Boy, especially when asked when was the last time he saw her and if he was in love. On the other hand, in an interview with Matt Lauer last week, he said “We’re fine. I think in the actual interview they tried to depict that [we broke up]. I think they [got that] from an interview from like a year ago. Yeah, we’re fine.”

So how’s RiRi dealing with the “break-up”? TMZ reports:

Rihanna’s gone up in smoke after calling it quits with Chris Brown … ripping a fat blunt inside a Hollywood nightclub early Monday morning … and TMZ has the pic.
Sources inside Greystone Manor nightclub tell us, Rihanna arrived around 1am with her assistant and security guard … and pretty much kept to herself. She left an hour or so later.
As we reported, Rihanna and Chris Brown are officially broken up … but our sources say it’s nothing new for the on-again-off-again couple. We’re told they’ll be back together in no time.

In other badgalriri news: She was giving me EVERYTHING in this KTZ fit with Loubs she wore to a Clippers basketball game. Yes Gawd Honey