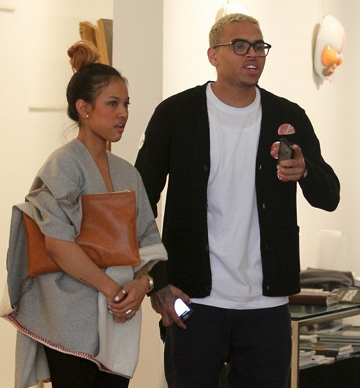 Well ladies, it’s official, Chris Brown is back on the market! (Well sort of) Brown released a statement to E! News yesterday that he and long time girlfriend Karrueche Tran have called it quits stating: “I have decided to be single to focus on my career.  I love Karrueche very much, but I don’t want to see her hurt over my friendship with Rihanna. I’d rather be single, allowing us to both be happy in our lives.”

This news comes right after it was reported that Chris Brown and ex girlfriend Rihanna were spotted together at the Barclay’s center during a Jay Z concert. People who attended the concert said that Chris and Rihanna were openly affectionate acting like a couple in love.

Karrueche has not spoken publicly about the matter, but has made a point to send a couple of tweets revealing her feelings. One of her tweets talked about her needing a man in her life instead of a boy and another reads “All I’m saying is…You don’t mess with people’s genuine feelings. You just don’t”.

I have to say that I am not the least bit surprised about the breakup. Chris and Rihanna have been drawn to each other like moths to a flame since they ended their relationship in 2009. It seems like no force of nature could keep these two away from one another, so I say let them have at it.

As for Karrueche, I think this was the best thing for her, because frankly rumors of RiRi and Chris’ sightings just made her look pathetic. Every time I heard a new Chris and Rihanna story I thought to myself “What is Karrueche thinking?! Does this girl live under a rock?!” At least now she can move on with her life, hopefully with a man who is over his ex! I think she just found out what everyone already knew, Chris Brown is still in love with Rihanna, and love is not something that can be turned off.

Although it took him way too long to break it off with Karrueche, we have to give Chris Brown credit for being honest with her, Good for him!