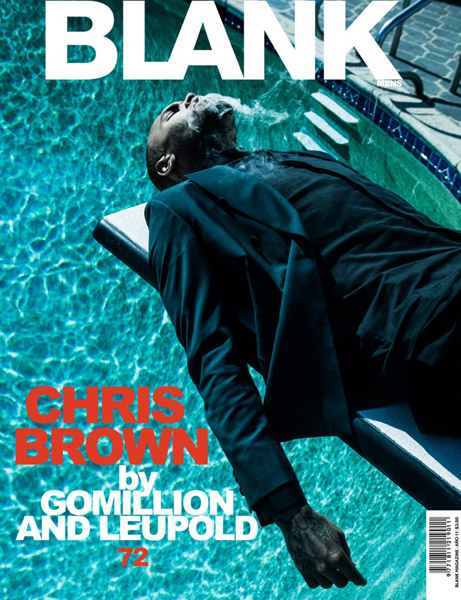 Chris Brown gets his grown and sexy on in the pages of Blank magazine. The 24-year-old Breezy gets fly in Gucci, Paul Smith, and Dolce&Gabbana in the slick shoot, which was photographed by Steven Gomillion and Dennis Leupold at a swanky house in theHollywood Hills.

Chris Brown suffered a seizure early Friday morning while he was working at Los Angeles recording studio the Record Plant, but he was not hospitalized.

According to a statement issued to USA TODAY early Saturday morning by Brown’s rep, Nicole Perna, the 24-year-old singer suffered a “non-epileptic seizure (NES). …His doctor tended to him this afternoon and attributes the NES to intense fatigue and extreme emotional stress, both due to the continued onslaught of unfounded legal matters and the non-stop negativity.”

TMZ reports that shortly after 1 a.m., the L.A. City Fire Department responded to a 911 call placed from the Record Plant studios, but when they arrived, Brown refused treatment and refused to be taken to a hospital.

Brown’s on-again, off-again girlfriend Karrueche Tran tweeted: “Prayers all day.” She later added, “a lot on my mind today .. I need a hug.”

Meanwhile, Brown took to Twitter Saturday morning: “They won’t love u until u r a memory…” he tweeted.