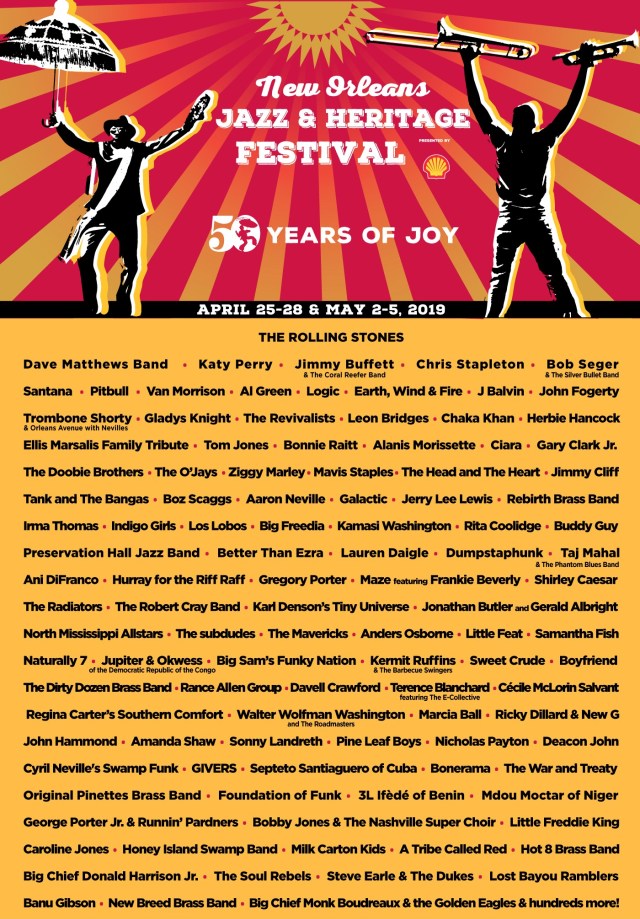 I don’t know about you guys, but immediately after ringing in the new year, I get super excited to find out who’s going to be performing at Jazz Fest. The lineup for the legendary, New Orleans festival is announced every year in January, and that day has finally come.

This year, the festival will celebrate its 50th anniversary, and it’s set to be a special event. For months, the word on the street was that The Rolling Stones would be performing during the celebration. Well, after long speculation, the cat is finally out of the bag, and it has been confirmed that The Stones will be making their way to the Big Easy!

Also on the bill are Katy Perry, Earth, Wind & Fire, Ciara, Gladys Knight, Pitbull, Logic, and of course, Maze feat. Frankie Beverly, to name a few. Check out the lineup below and the full, day-to-day lineup.

Adding to special editions for the celebration, an extra day has been added. This year, the festival will kick off on April 25, ending April 28, during its first weekend, and from May 2 to May 6, during its second weekend.

Louisiana residents (with a valid ID) have the chance to purchase up to two advance tickets for The Stones at the Superdome’s box office on Thursday, Jan. 17 from 10 a.m. to 6 p.m. There’s no doubt tickets will sell out fast, especially since 100+ Rolling Stones fans have been camped outside of the Superdome’s box office since midnight. You can purchase tickets through the JF website.