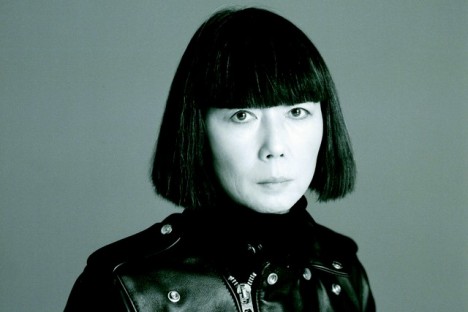 “I have always had an immense respect for Hermès’ tradition and artisanal know-how,” Kawakubo said to WWD.

“During this joint project, rather than being guided by the idea of the scarf as it is worn, I became interested instead in the beautiful ‘artworks’ that the designs on Hermès carrés represent, and I sought to change them by adding elements.”

“By combining them with abstract images, we have transformed the carré and created a unique object,” she added.

The scarves are split into two collections which will hit stores in February 2013. ‘Noir et Blanc’ scarves will retail at around €380, while the ‘Couleur’ will go up to €1,600. The silk carré scarves will be produced under the name Comme des Carrés.

The black and white models will appear exclusively at Comme des Garçons stores in Tokyo, New York and Paris. Fashion fans looking to hunt down the colored scarves will find them on sale at the Dover Street Market concept stores in London and Tokyo.

Kawakubo has previously collaborated with Azzedine Alaïa, Louis Vuitton, and Speedo. Comme des Garçons also released a collection with H&M back in 2008. ViaLuxuo