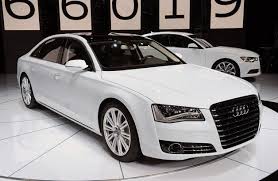 As part of its new look, the A8 has a redesigned rear bumper with two rectangular vents, chrome stripes and black tinted windows. The car’s dimensions remain unchanged, and its body is now made almost entirely of aluminum. The A8 will be available in eight colors, with wheels of all sizes up to 21″.

The LED headlights, now a standard feature, include high-beams with 25 diodes, each of which can be turned on, dimmed or turned off according to driving conditions. Audi’s advanced Matrix LED headlight control system, available as an option, even includes sensors that detect the presence of oncoming cars and dim the high-beams as they approach.