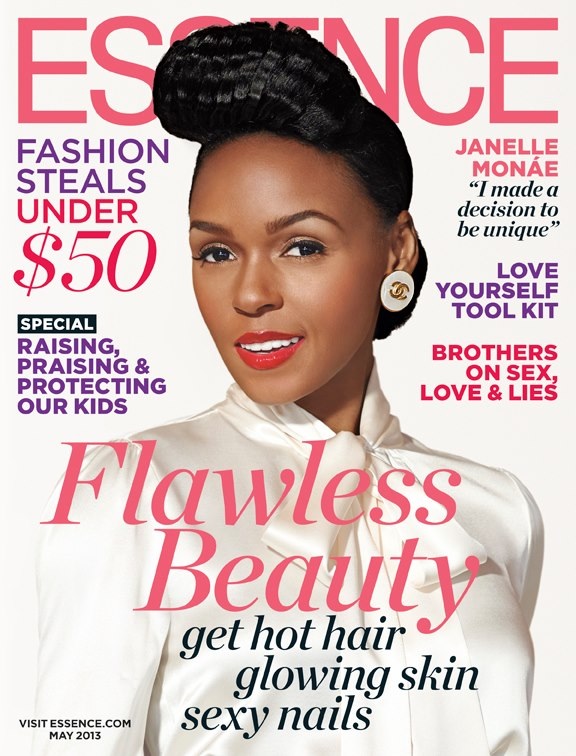 In the May 2013 issue, the singer boasts to the magazine that “I made a decision to be unique” as she reveals the origin of her iconic black-and-while ensembles and why her fans won’t ever see her using sex appeal to sell records.”  She tells the mag, “People don’t ask Jay-Z to take his shirt off when he rhymes.” #GoodPoint

check out her performance On Ellen a while back:

Jill Scott and her son Jett are on the cover of Ebony Magazine’s May 2013 issue, which also features a report on how Black America can save young men who are growing up in single-family homes, poverty and violence.

Inside, Jill is honesty pen and honest as she talks about the struggles of being a single mother and says that she can not teach her son how to be a man. Only a man can do that.

Peep a few of the excerpts from the interview below:

On being a single-mom:
That I-can-do-it-by-myself mentality is a lie. I’m sorry if I hurt anybody’s feelings, but you cannot do it all by yourself. You need a village: some aunties, grandmoms, friends. I couldn’t do this by myself and would be a fool to think I could.
On raising a young man:
It’s challenging being a single mom…No matter what I do, I’ll never be a man. Ever. I can show Jett how to be a thinker, how to enjoy music or how to feel, and to conquer. But I cannot show him how to be a man.
On motherhood:
Motherhood is getting your hands and your feet in the soil…When Jett puts my face in his hands and tells me, ‘Mommy you’re so pretty’ or smells me, it’s so wonderful.”
On being sexy:
The way I see things, I think that’s sexy. The way I think and the way I pray, I believe, are very sexy. I’ve never been the girl with too few clothes on. My mother told me… ‘It’s what you don’t do that makes you sexy moreso than what you do.’…”

BONUS: Queen Bey covers three magazines, Mrs. Carter Tour begins and Bey will do a remake of Amy Winehouse’s “Back to Black”. WHOA that’s a lot.

Meanwhile, Beyonce has teamed up again with Andre 3000, this time for a cover of Amy Winehouse’s “Back To Black.” According to reports, the song will be featured on the “The Great Gatsby” remake soundtrack which is being produced by her hubby, Jay-z.  The collab will make it’s debut when the film is screened at The Cannes Film Festival in May.