D. Woods On The Danity Kane Reunion::: “I Found Out On Twitter” 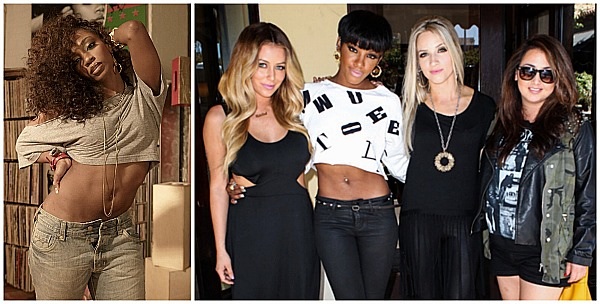 Last week, girl group Danity Kane reunited for the first time in six years and started chatting about the possibility of a new album. The girls were spotted arriving at a restaurant together in LA. But fans wondered one thing, where’s D. Woods? Unfortunately for her, she had to find out about the reunion on Twitter like the rest of us.

D. Woods recently did an interview with Hot 107.5′s Bijou Star, she said that although she wasn’t informed about the reunion, if they were to approach her to make music with them again, she would definitely consider it.

Catch some of the highlights below:

On the Danity Kane reunion
After seeing the pictures and the clip with the video,  I saw that they were in Los Angeles. I’m not in Los Angeles so there goes the reason why I was not in the picture. I’m actually in Atlanta right now. I’m in pre-production rehearsal for the new musical ‘Rebirth’, so that’s what I’m currently doing.
On how she heard about the ‘Dainty Kane’ reunion and whether she would consider joining the group again
I found out when my twitter timeline went off the chain. […] We did go our separate ways in the fall of 2008. […] I’ve committed to projects and developing my own label, so I know right now, I can’t commit to splitting my focus on something like that. I don’t want to hold anyone back. If they feel like that’s what they want to do, and they want to do it right now, they’re going to do it. I mean you don’t have to wait for me. I’m going to support them as I’ve always supported them, and I hope they will support me.
On Aubrey saying, “Diddy Who?” when asked if Diddy approved of the reunion
I don’t know what they meant by it, so I can’t speak on it and how they feel about the man but you know things happen. I know when I parted from the group I said, ‘Thank you very much for the opportunity. You know I’ve always looked up to you as a business man, as a music mogul and maybe we will cross paths again in thefuture. This industry is just about the ones who keep doing it. So you’re going to see me again.’
On whether they can legally use the name Danity Kane
We as a group came up with the name. I’m not spiteful and I’m not going to try and get something that I didn’t put in work for, so if they are working on some new music, if they are doing some new stuff that I haven’t contributed to, that’s theirs. I got mine over here.
On whether she still talks to anyone from the group
You know what, we are just on different walks of life and we’re spread out all over the country. It’s hard to keep up with people. […] There’s no bad blood to where its like, ‘I just don’t want to talk to her.’
On whether she would like to rejoin the group
Where it makes sense in my schedule and the things that I have coming up, there’s a possibility. If it was brought to me, I would definitely consider it […] I’m definitely focused on  the future. I’m really not trying to rehash the past. Just moving forward.

Listen to the entire interview below: