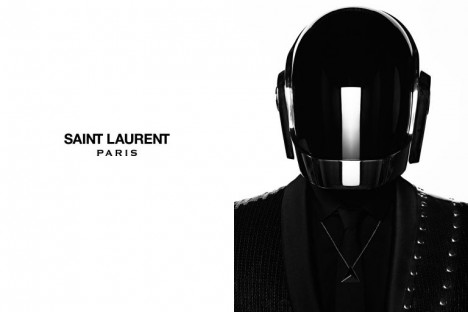 Set to hit stores at the end of May, Daft Punk’s upcoming album “Random Access Memories” is one of this year’s most eagerly anticipated releases.

Eschewing the heavy computer effects of previous efforts, Daft Punk tasked themselves with “[recreating] what we used to do with machines and samplers, but with people,” they told the Guardian.

In celebration of the record and the upcoming tour, Hedi Slimane has photographed the duo for the Saint Laurent Music Project, shown off in a short video.

In the black and white visuals, shot in Los Angeles, the band (made up of Guy-Manuel de Homem-Christo and Thomas Bangalter) are dressed in stage wear by Hedi Slimane for Saint Laurent, including a black glitter jacket, ‘le smoking’.

It’s a longstanding collaboration between the three artists, and Daft Punk were the first choice to create the soundtrack for Slimane’s first show as creative director at the recently rebranded luxury label back in October 2012.

Slimane has a lasting obsession with pop culture and rock ‘n’ roll, dressing many of the noughties’ slickest groups in his razor-sharp skinny suiting.

The designer’s Rock Diary project has also seen Slimane create a visual record of his relationships with his favorite musicians and bands.

Previous « Go & Beef It Up: Rihanna & Ciara Take Shots At Each Other
Next New Leather Jogging Pants From Balmain »