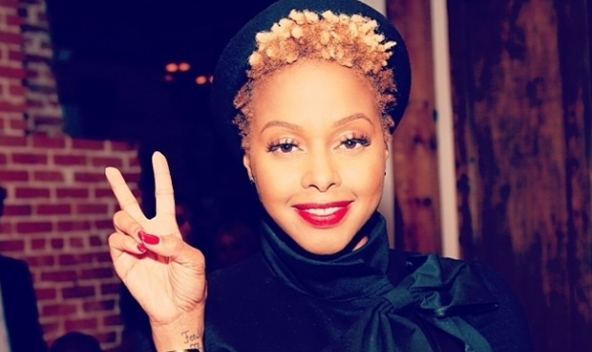 Of course she does!

I, just like most of her fans, said it was a bad idea for her to join the cast of R&B Divas LA. The new season features Chanté Moore, Lil Mo, Leela James, Claudette Ortiz, and Michel’le.

On a recent episode, Chanté asked the ladies to work on a collaboration where they would have their own verses on a track, but when they got to the studio, everyone found out that they’d pretty much be singing background and the hook for Chanté’s new single. Chrisette was the first to speak up and say, “I’ve never sang background for anyone before…” in which many perceived it to be her being snobbish in the situation. Clearly those people are crazy for being upset with her. Why would any of these accomplished artists sing background on one of the others tracks. Yes, there’s the humble yourself thing but this is not that type of situation.

Well Chrisette Michelle decided to write a letter to her fans via IG:

Hey can I write you a letter? Dear fans, Maybe you were right about me not doing a reality show. I have had so much fun staying beneath the radar. I’ve traveled to more countries then I can pronounce and made friends of fans and celebs alike, collabed with my favorite artists (you know I’m a nerdy hip hop head). Truth is, I wasn’t raised on R&B. I just happen to sound okay singing it. I’ve never thought that wearing angel wings and trying to be open about feelings would make people send me evil tweets and receive awful phone calls. A Diva. Maybe that’s not the right term for artists now a days the way it was when Whitney was here. Maybe it’s meaning has changed. I’m truly just here to say hello. On your TV screens to show you who I am outside of this music/Hollywood stuff.

Maybe reality was a mistake. Maybe I should stay in my comfortable cave where I’m only loved. Half a million twitter followers, 200k insta Rich Hipster’s and 2.1 million Facebook likes have come from the music alone. From backstage hugs and kisses. From marriage proposals on my open hearted stage. From my quirky ever changing style. From hellos on the streets. From meet & greets. The moments un-telivised. Some people aren’t meant to share their personality. Maybe I’m one of those people. One of those who are protected by the Art. Art is love and it covers. It shields. I don’t see myself doing reality again. I’ll hang out with my pet unicorn in Artist-ville.

This negativity is tragic and I can’t transfer these vibes to my Art. I love you. I won’t speak negativity against any one on the show in any further interviews. I won’t speak the name of people who quell my light. I can’t participate in brokenness. Healing is my ambition. Light is my nourishment. Be well. The Rich Hipster Captain #chrisette #ChrisetteMichele #Art #RichHipster #randbdivasLA #rbdivasla #rbdivas #iamstillhere #itsByTheGraceOfGod

I thank the Lord that she was able to go in and see for herself and not just go off of other people’s opinions! Much respect to you Chrisette Michelle, I’m ready for some awesome new music from you!