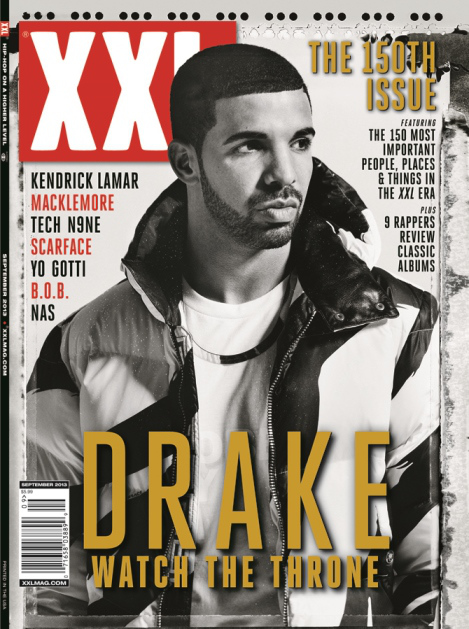 We’re sure this headline will get the people going. Drake returns to the front cover off XXL for the magazine’s 16th anniversary. The 150th issue occupies newsstands on August 20.

ON THE NEW ALBUM I remember coming into this year thinking, “How am I going to cut through all these people and shine?” I’ve never been part of a year when so many legends are dropping projects. How am I going to be seen? I’m going to be like the kid waving in the background in the photo with all of his tall relatives. And, I guess, those were my initial thoughts, and not to say that I haven’t enjoyed some of the stuff that has come out this year, but it didn’t pan out the way I thought it was going to. I think I am going for it, to really establish what are murmurs or things being said quietly, “Um, I think that Drake might actually…” On September 17th I want people to be like, “Oh, we were right.”

ON HIS IMAGE Do I think that if I didn’t have, for lack of a better term, a unique look about me, if I was from somewhere in America and if I hadn’t been on a kids TV show [Degrassi: The Next Generation], would I be as famous? I don’t know, man. Honestly, I don’t think so. I was just some young kid on a TV show. And I haven’t become anything else while I’ve been in this position. It’s not like I got here and was like, “Oh, got to switch up my image.” I don’t wake up nervous. I feel like maybe a lot of these guys do. How old are you, really? What is your background, really? What have you really done in the drug game, in the thug game?

ON THE COMPETITION It’s tough for me. That’s a guy I can’t pretend not to like. He’s the guy to me, in a lot of ways. That’s Kanye West. But I’m also here to be the best. I’m here to surpass. I’m here to outdo. I’m ready for whatever with anybody.

ON HIS SUCCESS I get Jewish people coming up to me proud like, “Mazel Tov, bro. Come to my house for Shabbat dinner.”