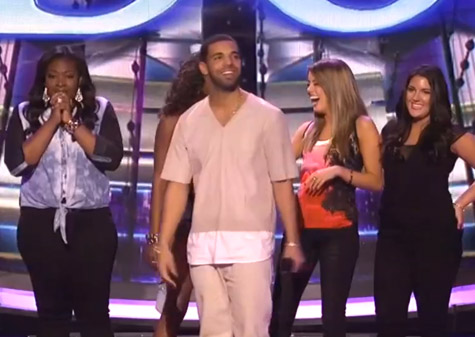 Having Nicki Minaj as an American Idol judge does have its perks. The Young Money diva’s buddy Drake appeared on the live telecast last night to surprise a contestant that had just sung one of his songs.

Candice Glover performed the Toronto rapper’s hit “Find Your Love.” At first an audio message was heard from Drizzy. “I just wanted to let you know that tonight I was at home and I know what it is to be in your position,  be under heavy scrutiny with all those tough judges,” he said. ” I just wanted to let you know that I was so honored that you sang my song and you did such an incredible job, you have such an angelic voice. I almost with you were there in the studio creating it with me.”

Then moments later Drake was on stage surprising the young contestant..

Drake’s new album,  Nothing Was The Same, is due in stores later this year.