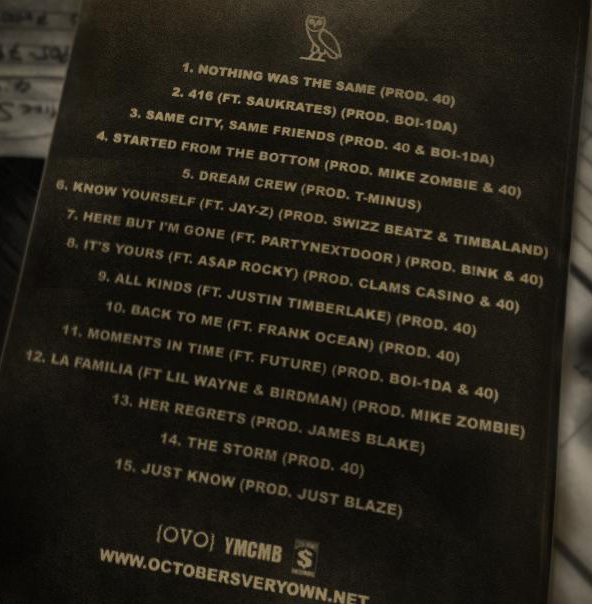 This could be the tracklisting for Drake’s upcoming Nothing Was The Same album coming out later this year…  We hope it is this look like a nice line up!!

Monday afternoon an authentic-looking track list for Drake’s forthcoming album Nothing Was the Same began to float around Twitter. According to Vibe, the origin story went like this: Drake’s dad posted a photo of the track list on Instagram before deleting it, but not before it was screencapped by quick-trigger Internet sleuths. According to the picture, Timberlake, Frank Ocean, Future, and A$AP Rocky all feature on the album, with production credits from Timbaland, Clams Casino, and James Blake.

The photo showed the track list printed on a placard that resembles the menu at a very expensive restaurant, and featured just enough bait (from underground OVO affiliate PARTYNEXTDOOR to underrated rap producer Bink to two artists — Ocean and Blake — playing this year’s OVO Fest) to seem believable. But, of course, it’s a fake — which was confirmed by frequent Drake collaborator Boi-1da and Rap Radar’s Elliott Wilson That the TRACK LISTING IS FAKE!!