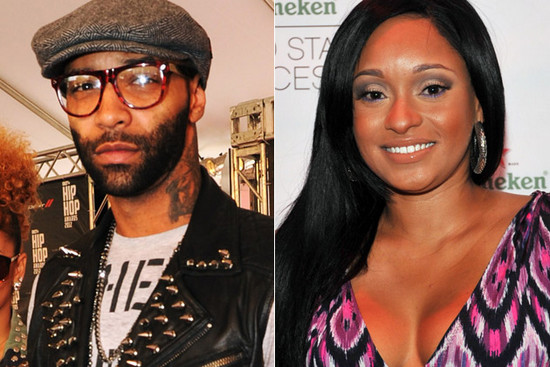 Tahiry Jose and Joe Budden were spotted filming a scene for “LAHH” that turned into a proposal!

As Tahiry (who wore an Alice + Olivia top & pencil skirt) prepares to open a new go-go bar named Club Suite 135, the duo were spotted filming an upcoming scene that apparently turned into a proposal. The couple were in the middle of Times Square and a huge megatron showed Joe holding up cards that said the words “forgiveness, family, sex, commitment and Tahiry.”

We’ve watched the two go through their ups and down (very publically) for a few years now, but it looks like Joe is really ready to get serious. SIDEBAR: The couple sat together for NY fashion week in September, but they were were NOT romantic….maybe things have changed.

If you’re wondering what happened…..our(theybf.com) tipster told us that Tahiry said “No.” SMH…..there’s always a chance that she could flip and say “Yes” during the reunion taping. Mona Scott loves a good “unscripted” proposal…..

Followers of Joe know that he loves to “overshare” on social media, but he’s been “silent” about the proposal. Hmmm……