Eve Visits The Breakfast Club: Dishes on New Album and Living in London with Boyfriend Maximillion 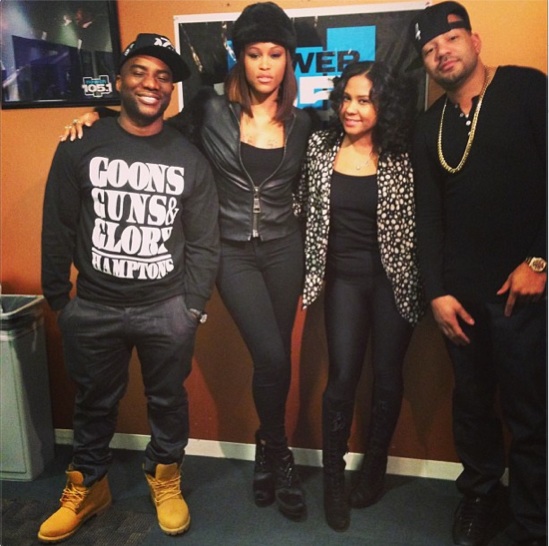 It’s been a minute, ok maybe hours, since us Americans have seen or heard from the Ruff Ryder Eve. She stopped by the Breakfast Club to tell us what’s n been going on. Her new album “Lip Lock” will drop May 14, 2013, she is now living in London with her boyfriend Maximillion, and shuts down the pregnancy rumors. She also shares her thoughts about Nicki Minaj and if she would work with Azelia Banks.

On the pregnancy rumors: I’m not pregnant.  That was that puffy coat.  I’m not pregnant, not yet.  But hopefully soon….knock on wood.  People lie and say my friend said this but I don’t know what friend that was.  But I want kids.  Kids will never hold you back.  To me, that’s the ultimate blessing. (She also said she and her man aren’t necessarily trying to have babies, but they’re not trying NOT to either.  We all know what that means…)

On Beyonce’s Superbowl performance and people hating on Michelle Williams: She murdered it.  I loved it and I think it was really good.  And I think Michelle is doing other things but it was nice seeing them together.

On why she wants to come back to the rap game: I been wanting to come back it’s just the situation hasn’t been right.  As far as label stuff, management, lawyers, literally the whole situation.  And now it’s the right situation.  I know it’s been a minute but I miss my music.  It’s my first love and I still got sh*t to say.

On her man Maximillion Cooper (pictured above): He’s not a billionaire.  He’s completely comfortable.  Here’s what his Gumball 3000 company is all about.  This is the 15th Anniversary.  I’m into cars because I love cars and it’s my tomboy side.  So the first year I did it, I was Team Puma.  And that’s how we met.  Now I love it.  It’s a lifestyle.  150 people enter and do it once a year.  You just drive. Some people do it for charity or some people do it because they’re in an office all day and want a release.  And they’re also running countries–a lot of kings and princes do it.  It’s 7 days and next year it’s in Copenhagen and ends in Monaco.  It’s a clothing company too.  He’s turned a lifestyle into something big.

His friends started sending him wild links about me and asking him why he’s dating this rapper chick, since he comes from a certain type of place.  We had to talk about that, but now he doesn’t care.  He’s good.

On “Love & Hip Hop”: I’m scared to watch it.  I’ll hurt my eyes and brain.  Even before Stevie J was on it I was scared to watch it.  But when I was younger I was a wild child [like the girls on the show].  (And she said she’s too scared to do realty tv herself…and no wedding special when that time comes.)

On being modest about ballin’ since Swizz Beatz said she could be sh*ttin on chicks with how she’s living: I’m living the life I’m supposed to live.  I’m chillin.  I can’t be all that extra in your face chick.  I’m a laid back chick unless you’re in my face and you get on me.

On moving to London: I moved to London for love.  And I needed a change.  And I’m glad I did it because now I see things differently.  But now, I’m back in NY and I love it.

On people not liking her new “She Bad Bad” song: A lot of people didn’t like it.  I didn’t want to do the same thing you all have already heard from me.  But it’s going to take a while for people to warm up to me again.  But I had a million views on the video so that’s all care about.

On getting Azealia Banks on her album: I like her word play, but I just don’t like the drama.  That bothers me.  We tried to holla at her to get on the album and I think she was one of the ones who said, “I think I’m busy.”

On Nicki Minaj: It’s not all my cup of tea.  I’m proud of her, I don’t know her, but she’s doing her thing and you can’t be mad at that.  I love hearing her on certain records–like on “Girl On Fire.”  But you can’t hate on someone that’s successful.

Check out the full interview below: