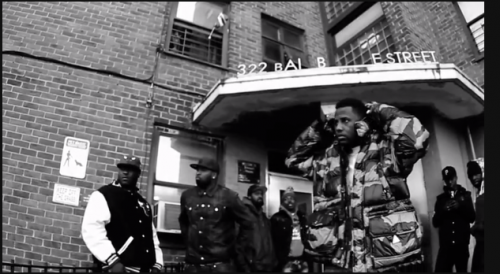 Brooklyn takes center stage in the visual for Fabolous’ “B.I.T.E.” track, off his The Soul Tape 2 mixtape. The proud native of New York City’s biggest borough goes for the black and white look for the gritty record dedicated to the Notorious B.I.G.

Fab films scenes at the Breevort Houses where he grew up, located in Bedford-Stuyveseent. Director M-Visions is commissioned by the 35-year-old rapper, to help bring the concept of his “B-tch I’m Tryna’ Eat” record to life.

To date Fab’s The Soul Tape 2 project has been downloaded more than 750,000 times, momentum of which will hopefully lead into more anticipation for his forthcoming Loso’s Way 2 album. The release teams him with the likes of Rick Ross, Young Jeezy, John Legend, and Chris Brown, the latter of which appears on his lead single, “Ready.” During an interview with Vibe, Fab explained that the song symbolizes his new position in the game. “The music is in a different place, but I’m more-so ready to get my music known to that generation,” he said. “I think that a lot of people know my music from the past generation. If you had to reverse it to this generation, Big Sean would kind of be the me of last generation. But I still want to continue my music and get the world of this generation to know it.”
The video for “Ready” is set to drop soon. Take a look at “B.I.T.E.” below.
[Spotted at Rap Radar]