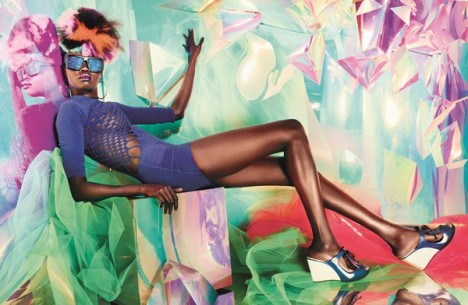 Karl Lagerfeld is teaming up with footwear brand Melissa. The designer has signed up to create capsule collections for the label over the next four seasons.

The first range – consisting of four different autumn/winter 2013-14 styles – will be unveiled in March.

Melissa footwear is no stranger to collaborations, having previously teamed up with iconic designers Vivienne Westwood, Jean Paul Gaultier and Gareth Pugh.

The shoes are made of 100 per cent recyclable plastic and have been spotted on the likes of Anne Hathaway, Kate Moss and Katy Perry.

Paulo Pedo, CEO of Melissa, referred to the Lagerfeld partnership as “one of the most exciting collaborations the company has ever seen”.

This is the latest collaboration for Lagerfeld, in the past the designer has created ranges for H&M, Net-A-Porter, and Macy’s in America.Via.Luxuo