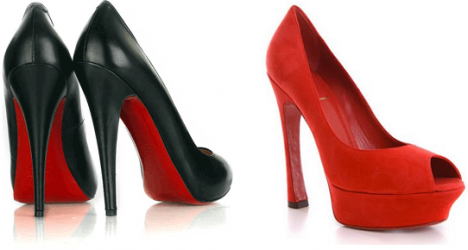 French shoemaker Christian Louboutin can trademark his famous red soles, a US court ruled Wednesday, reversing a ruling that would have allowed rival Yves Saint Laurent to paint its outsoles scarlet.

The New York battle featured two of the fashion world’s heaviest hitters. Last year, a federal judge ruled that Louboutin, widely recognized for the use of red soles, could not stop competitors from doing the same thing.

But the Second Circuit US Court of Appeals overturned this, saying: “We reverse in part the order of the District Court insofar as it purported to deny trademark protection to Louboutin’s use of contrasting red lacquered outsoles.”

“We conclude that the trademark, as thus modified, is entitled to trademark protection,” the ruling said.

The decision was something of a setback for YSL, a fellow French luxury brand, which had celebrated in August last year when US District Judge Victor Marrero ruled that Louboutin could not claim a color as its own.

“Because in the fashion industry color serves ornamental and aesthetic functions vital to robust competition, the court finds that Louboutin is unlikely to be able to prove that its red outsole brand is entitled to trademark protection,” said Marrero, who revealed himself as an ardent admirer of the sexy high-heeled slip-ons.

Wednesday’s ruling does leave one bit of wiggle room for those with an urge to paint their soles — it’s allowed as long as the whole shoe is red.

The YSL shoe that had originally driven Louboutin to court was red from top to bottom, which is in fact allowed, the appeals court said.

“Because Louboutin sought to enjoin YSL from using a red sole as part of a monochrome red shoe, we affirm in part the order of the District Court insofar as it declined to enjoin the use of red lacquered outsoles in all situations,” the ruling said, making the distinction with “contrasting red” shoes.

In Paris, YSL’s parent company PPR said it had “won the trial” thanks to the exception for shoes where the red sole is part of an entirely red design.

“Louboutin’s suit tried to stop YSL from using monochrome red shows with red soles. What the judge said today is that YSL has got the perfect right to use red shoes with red soles,” the company said.

Louboutin has marketed shoes with red outsoles since 1992 and he registered the look as a trademark in the United States in 2008.

Louboutin’s glam footwear was featured on the consumer-worshipping television series “Sex and the City” and sells about 240,000 pairs each year in the United States alone, with revenues of about $135 million.

A pair typically costs between $700 and $1000, but can sell for far more, with the Lady Peep Geek Embroidered Pump, complete with red-lacquered under soles, listed at $1,695 in the Neiman Marcus department store.