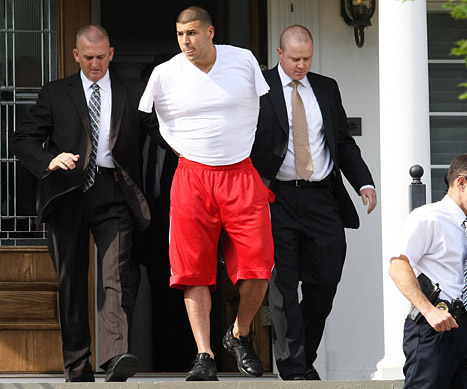 This investigation has been brewing for a while now but it seems that authorities finally have enough evidence to prosecute New England Patriots tight end Aaron Hernandez with murder. Reports the AP:

Hernandez, 23, was taken from his North Attleborough home in handcuffs just over a week after Boston semi-pro football player Odin Lloyd’s bullet-riddled body was found in an industrial park about a mile away. Less than two hours after the arrest, the Patriots announced they had cut Hernandez, a 2011 Pro Bowl selection who signed a five-year contract worth $40 million last summer. Lloyd was a 27-year-old athlete with the Boston Bandits who was dating the sister of Hernandez’s fiancee. He was shot repeatedly in the back and chest, authorities said.

According to prosecutor Bill McCauley Hernandez was upset Lloyd talking to people he had a problem with at a club so he picked him with two friends days later and began to question him in his car.  Perhaps suspecting something was wrong Odin Lloyd texted his sister “Did you see who I am with?” and when she asked who he replied “NFL” and “Just so you know” at 3:22AM minutes before he is believed to have been killed.