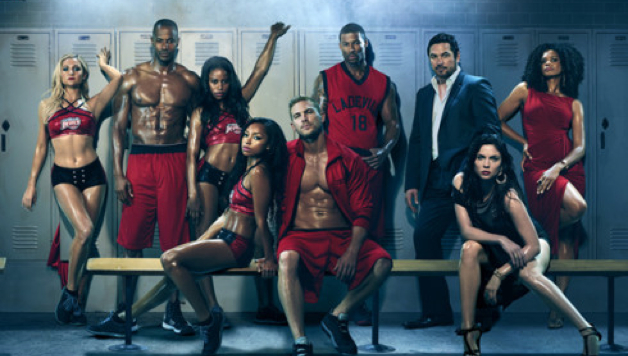 Once again, this scripted series has come at a perfect time. I am all  for the craziness of the “reality show” nonsense, but we all need a break from time to time to enjoy some real television. Hit The Floor definitely provides that relief for me. It’s exciting, sexy, and scandalous all in one.

In case you haven’t been watching the series; Let me catch you up on it… The show it follows the lives and loves of the Los Angeles Devil Girls, the premiere dance team in all of professional basketball. At its heart is Ahsha, a sheltered young woman who joins the team against the wishes of her mother Sloane, who knows this treacherous, tempting world all too well having been a Devil Girl herself. Olivia is the shrewd squad manager, Jelena is the star dancer who won’t let anyone else share the spotlight and Pete Davenport is the former All-Star who’s come back to coach his old team.

Season 2 of the series aired May 26, 2014, and it was well worth the wait. New characters, more drama, and more scandals. Nothing was predictable, but pretty much everything that was shown in the previews was in the first episode, glad that’s out of the way.

Meet one of the newest characters:

Former Ohio Forward that Oscar buys to help secure the Devils a Championship. A star player to rival Derek and Terrence. Sexy, hugely successful and incredibly smart. But there’s more to Zero and his well-crafted image than meets the eye.