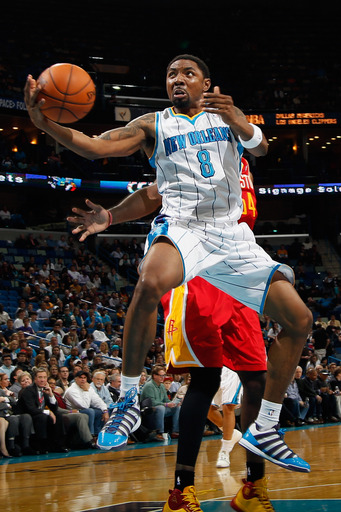 New Orleans(10-25) won their third straight game 88-79 against the Houston Rockets(21-15) on Wednesday night. The Hornets started the game with good energy and an aggressive game plan of closing out on the 3 point shooters of Houston. New Orleans also did a great job of attacking the paint early led by the direction of Greivis Vasquez. Vasquez had 5 assists in the first 7 minutes of the game and helped the Hornets start 7 of 12 from the field.

The Bees offense slowed for a bit in the middle of the first quarter but didn’t allow the league leading scoring Rockets to score from the field for over 4 minutes. Leading 16-12 at 2:49 in the first quarter, New Orleans got a little sloppy committing two turnovers and a bad penalty with 00.5 left in the quarter, allowing Houston to climb back in front 22-18.

Coming out the break to start the 2nd quarter, the bench for the Bees went on a 10-5 run to reclaim the lead 28-27 at the 7:46 mark. Sparked by Jason Smith’ six points, two boards and two blocks New Orleans’ second swarm help the Hornets take control of the tempo again during that span.

Even though the Bees were controlling the pace and dominating the paint they weren’t making the most of it. The Hornets scored only five points in a six minute stretch once the starters returned. Fortunately, New Orleans only found themselves down by one at the 1:27 mark when Gordon tied the game 34-34 at the line. After a Hardin bucket, the Rockets led 36-34 at the half.

Only shooting 33 percent from the field, the Hornets had a lot to feel good about at the break. They held the high flying Rockets to 36% shooting, won the offensive rebounding and turnover battle both by six and out scored Houston 22 to 12 in the paint.

The Bees continued their attacking play coming out the break but saw Houston take a 49-38 lead after 13-4 run early in the 3rd period. The Hornets would respond with a 7-0 spurt themselves to draw within 4 of the Rockets. The two teams would trade buckets, turnovers and possessions until the end of the quarter but Houston would push their lead back up to 10.

Starting the 4th down 59-69, The Hornets may have played their best defensive quarter of the season. Roger Mason and the Bees’ bench though gave New Orleans the much needed scoring they had to have to get back in the game. Led by Mason’s 13 points in the period, the Hornets went on a 24-6 run that gave New Orleans an 83-75 lead with 2:36 left to play. During that stretch, New Orleans held Houston scoreless from behind the arc, out rebounded the Rockets 13-4 and gave up no 2nd chance points. They also got 3 blocks and didn’t allow Houston to go to the stripe.

The Hornets face a devastated and banged up Minnesota Timberwolves(16-16) ball club that has just found out they will be without Kevin Love for 8 to 10 weeks with a broken hand. Love broke his right hand for the second time and just adds to the list of players on the shelf for Minnesota. Chase Budinger, Malcolm Lee and Brandon Roy are all coping with knee injuries and J.J Barea will make his return from back spasms tonight at the New Orleans Arena. 7 O’ Clock Tip-Off.