In Case You Missed It: RiRi & Teyanna Taylor Battle It Out On Twitter Due To “Shade” On Instagram 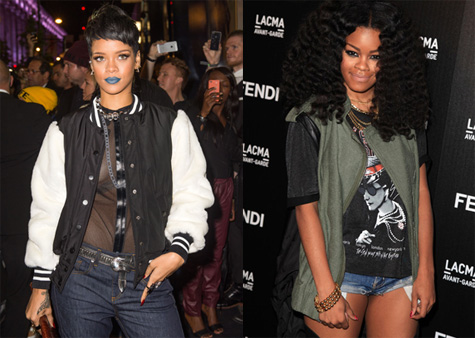 There’s a rumble in the jungle and it’s starring Teyana Taylor and Rihanna. Can we say catty!!!

Earlier today, Teyana Taylor went off on Rihanna Harlem style after Rihanna posted a video of her hairstylist Yusef singing Anita Baker’s classic hit “Caught Up In The Rapture,” while wearing a wig and snapback similar to the style Teyana Taylor is known for. The video came across as subliminal shade and a mockery of Teyana, who just two weeks ago, posted an Instagram video singing the same song.

After Teyana posted a series of tweets to Rihanna, letting her know that she didn’t appreciate the subliminal shade, Rihanna eventually responded:

Screaming in an empty room! #dontfeedtheanimals

I REFUSE to help your career…you will NOT get an @ from me! Not til you pay me! #iRefuse

Meanwhile, her best friend Melissa Forde, who doesn’t have an image to uphold, decided to go hard for Rihanna:

And of course, Teyana responded back:

Melissa & Robyn never been about that life. Them b-tches know wassuppp!

Sh-t I Hate Broke B-tches Too.

Rihanna also took it a step further and changed her Twitter header to show her net worth in comparison to Teyana Taylor’s:

Ya net worth & ya body count go neck to neck. #IndustryP-ssy

Teyana also changed her Twitter header to a photo of her beating up Rihanna:

Lawd today…Rihanna won, if you ask me. LOL