Is Rihanna Set To Be New Face Of Chanel? 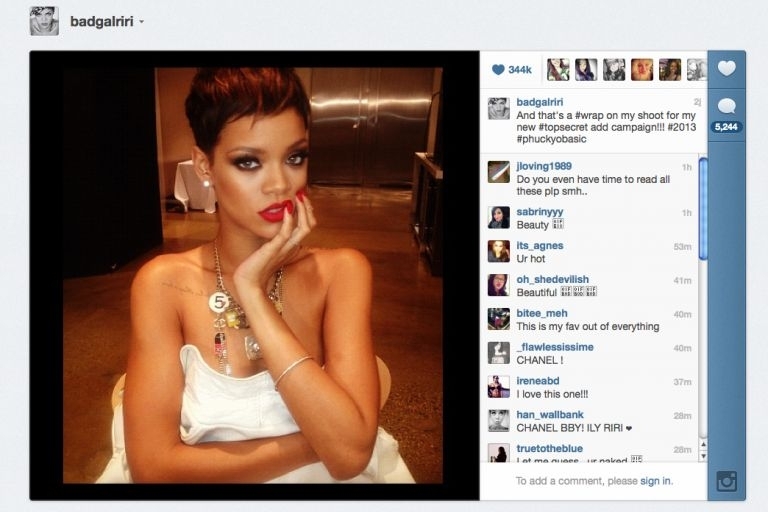 After a mysterious tweet from the popstar, the rumor mill sprang into action, with fevered speculation that Rihanna might be a new face of Chanel.

Posted on Monday, Rihanna’s Instagram photo showed the star wearing nothing but a draped jacket and a chunky Chanel necklace and boasted of a “#topsecret add campaign.” Of course, the internet joined the dots and began to call the announcement. We weigh up the evidence:

After Naomi and Iman, fashion has been missing a global black star. The recent Chanel haute couture show had a smattering of Asian faces, but didn’t contain a single black model, and Joan Smalls and Grace Mahary were the only two black girls wearing the brand’s ready-to-wear collection last autumn.

A black brand icon for the Chanel label could be something of a revolution for a fashion world which struggles with diversity at times, and it could force the hand of other luxury labels to react with more representative shows and advertising.

Hip-hop has gone mainstream and Jay-Z, Beyoncé and Blue Ivy are the pop-culture first family. Chanel could be the first of the big fashion houses to fully embrace a musical form which has always embraced the concept of luxury brands.

Growing up with an alcoholic father in Bridgetown, Barbados, Rihanna has now had 12 number one singles on the Billboard 100 (selling 75 million copies) and has sold 25 million albums. There’s something of the hip-hop rags-to-riches ideal in the story that Gabrielle ‘Coco’ Chanel herself would have liked.

Born to an unwed peasant mother, Coco Chanel worked her way up through Parisian society as a club singer and a seamstress before she hit the big time.

Rihanna is only 24 years old. Blake Lively was of a similar age (admittedly with a more classic Chanel look) when she signed as a face of the brand.

With luxury brands increasingly focused on capturing the next generation of fans, it makes sense for Chanel to attract a more youthful star, especially one with such global appeal and social media weight.:

Rihanna boasts more than 28 million twitter followers, and was ranked at no 20 on Time Magazine’s ’100 Most Influential People in the World’ in 2012.

Chanel is increasingly focused on celebrities like Brad Pitt and Blake Lively who offer a fairly clean image to the world both of themselves and the Chanel brand.

The constant speculation about Rihanna’s private life with on-off boyfriend and convicted felon Chris Brown, and risqué twitter photos featuring nudity and alleged marijuana use could damage the brand. Remember, despite all of the big logos, one of Chanel’s key trademarks is discretion and elegance.

There’s always been more than a touch of the ‘je ne sais quoi’ about Chanel’s stars. One of Karl Lagerfeld’s favorite actresses (and regular red-carpet star for the brand), Diane Kruger can speak fluent French, English, and her native German tongue.

She also trained in Paris as a ballet dancer. By contrast, Anglophone Ri-Ri might seem a little ‘street’ for an audience expecting typical Parisienne charm.

Rihanna is certainly a style icon, but it’s not the Chanel style that she’s channeling. Take a look at the Chanel shows and take at look again at Rihanna’s own looks.

While there is a fair amount of crossover, her more individual touches (short skirts, tatoos, punk rock hair) might not sit so well with a Chanel silhouette which still has to cater to plenty of older, established customers.