‘James Bond’ Bentley Up For Auction 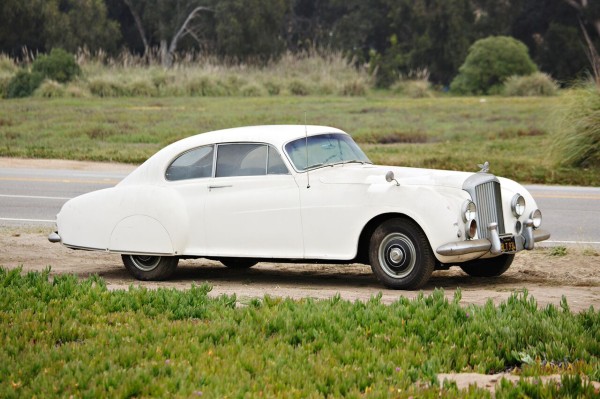 A 1953 Bentley R-Type Continental Fastback once owned by Ian Fleming could start a bidding war at this year’s Gooding Company Pebble Beach auction on August 15.

The 1953 Bentley R-Type Continental Fastback is completely unrestored, having been left to sit in a Hollywood garage for the last 30 years.

Classic Bentleys have been climbing in price in recent years and there’s little doubt that the R-Type Continental is one of the finest and most desirable grand tourers ever built by the company.

However, despite its unrestored state, there’s every chance that this car could fetch $2 million when it goes under the hammer in August. And that’s because it used to belong to none other than Ian Fleming.

Fleming bought the car new and specified a number of special features including manual transmission, lightweight seats and fitted luggage.

The story goes that the Bentley was a gift for Ivar Bryce who, as well as being one of Fleming’s closest friends was a real life intelligence officer and the inspiration for the character of Felix Leiter in the Bond novels.

But the Bond connections don’t stop there. The car makes an appearance in the 1961 James Bond novel “Thunderball.” Bond decides to buy the car while simultaneously foiling a SPECTRE plot to hold the world to ransom over a brace of missing nuclear warheads.

As the series of Fleming-penned Bond novels rolls on, Bond customizes the car, putting in a bigger engine, adding a supercharger and a racing clutch.

While the cinematic James Bond will forever be associated with Aston Martin, the James Bond depicted in Fleming’s novels only once got behind the wheel of an Aston — a DB Mark III — during “Goldfinger.”

Bond’s car of choice was always a self-customized Bentley and throughout the novels it was his vehicular marque of choice.