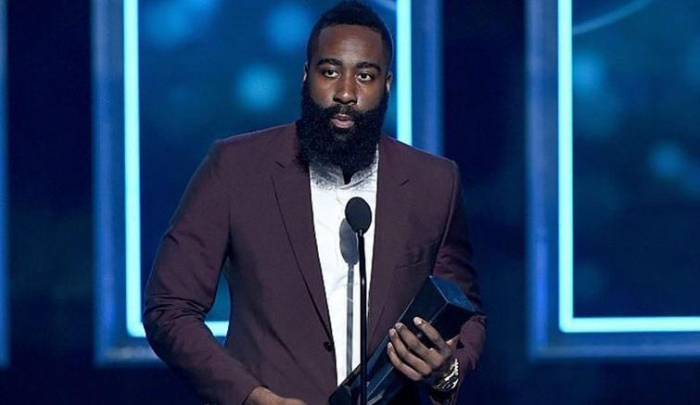 According to the Houston Chronicle:

“I want to thank God, thank my mom, my family and friends for all the support, the continuous support,” Harden said. “I want to thank BET for this beautiful event. To the NBA Players Association, (executive director) Michele Roberts for giving players a voice to speak their minds, and then just the players, the peers, I appreciate this vote. It means a lot and I’m really thankful for it.”

Curry was the NBA’s official regular-season Most Valuable Player award, taking 100 of the 130 first-place media votes, with Harden second with 25 first-place votes. Curry defeated Harden’s Rockets in the Western Conference Finals and helped lead the Golden State Warriors to the NBA championship. But Harden’s selection was surprising because of the results when many of the other award winners were announced. […] Curry had been named the league’s “Top Clutch Performer,” taking the award over Harden, James and Westbrook. He had also made the winner of the “Hardest to Guard Award,” winning over Harden, James and Westbrook.

James was cited as the “Player you secretly wish was on your team,” chosen by fellow players over Curry, Anthony Davis and Tim Duncan. […] The only other performance award went to DeAndre Jordan as the “Best Defender,” with Jordan chosen over Tony Allen, Davis and Jimmy Butler. (Kawhi Leonard and Draymond Green, who finished first and second in the NBA balloting, were not finalists.)

What are your thoughts on the NBA players Choice Awards?