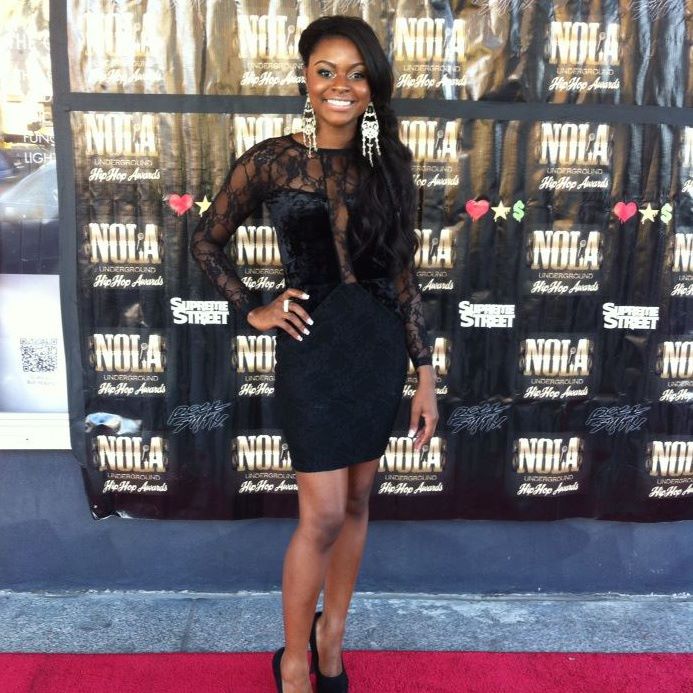 I got the opportunity to host the red carpet at the NOLA underground hip-hop awards at the joy theater on Canal Street. It was everything that I expected it would be and so much more. There was a host of local rappers, singers, DJ’s and radio personalities; some of who were nominated for awards, others just came out to show their fellow counterparts respect and love.

I arrived at the newly renovated Joy Theater at 4:30 pm to prepare for red carpet interviews. I was excited and a bit nervous because I wasn’t sure how the artists would receive me. I spent weeks doing research on each artist so that I’d know exactly what to ask before I got into interviews.

People started lining up to walk the red carpet at about 5:10 and we opened the carpet up at 5:20. I have to say that fashions were definitely memorable; the ensembles I saw were all but understated. Either you loved what you saw or you hated it, there was no in between, I happened to love almost everything that I saw. The dresses, shoes, pants and shirts were all a personal extension of the artists’ style.

My very first interview was with the lovely “Uptown Angela” of Q93 who was one of the recipients of the lifetime achievement award. She was extremely humble even though she was to be given the highest honor of the night. She gave up-and-comers advice on how to navigate their way through the media industry and politely thanked me for taking my time to interview her.

I must say Angela set the tone for how the rest of my interviews would go for that night. Everyone that I got the pleasure of speaking with was humble, open and supportive of everyone who was nominated.

After we got inside the show we were entertained by our two hosts for the evening, Shiny Green, and Lanino Brown. Their high-energy stage presence kept the attention of the crowd all night long.

The performances of the night were nothing short of amazing. The most memorable being the one by 3D Natee, an underground female rapper with enough talent to fill 3 Joy Theaters! I especially enjoyed the pre-recorded cypher performances, which gave us a chance to see all the nominees do what they do best, freestyle. If I had to pick the best cypher freestyle, I’d have to give it to JaSoRude, she has an old school female MC flair. Her style is impeccable because it’s all about her music, not her hair, her outfit or her body; it’s all about the music.

The best acceptance speech of the night has to be the one given by Iris P, a local R&B vocalist. She was so excited to have won the award, and her exuberance made everyone in the room love to see her win, we all felt like we won with her.

The night was full of winners, great performances, memorable outfits and funny moments. However, the night was about so much more than those things. This was the night that local artists came out to support one another, no beef, no confusion, just pure love and support and you could feel it. They say New Orleans is a place like none other and this night proved it, we came together for the love of hip hop and for the love of our great city.