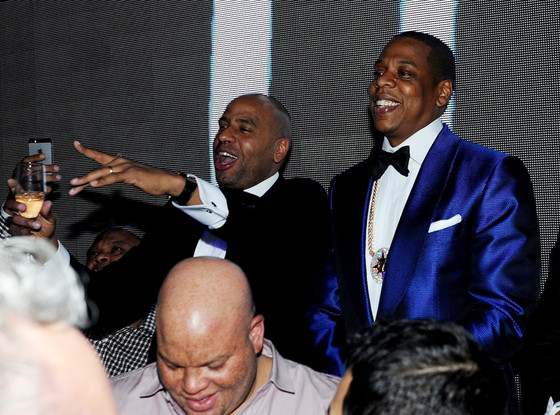 After Jay Z’s Magna Carta concert in Las Vegas, it was time for the after party.
The hip hop mogul had his bash at Hakkasan Las Vegas Restaurant and Nightclub at MGM Grand Hotel and Casino Friday night, kicking off the shindig with a special dinner at the restaurant.
While his wife Beyoncé was missing in action (she’s in the midst of her own world tour), Timbaland was on hand for the pre-party festivities, with the duo laughing, chatting and dining with a big group of friends.
Jay Z stuck to his 22-day vegan diet during the dinner, but other guests munched on the restaurant’s signature dishes like the crispy duck salad and roasted Chilean sea bass with Chinese honey.

Following the dinner, the “Tom Ford” rapper stepped into Hakkasan night club in a blue suit around midnight, arriving with an entourage of about 85 (!) guests.
Jay Z seemed to be having a blast throughout the night, sipping on D’USSE Cognac cocktails and dancing to hits spun by DJ Vice.
He got particularly excited when the DJ played his latest collaboration with Beyoncé, “Drunk in Love,” cheering and toasting with champagne in honor of the song.
Beyoncé released that song, along with 13 other new songs and a ton of music videos to go with it, in a surprise self-titled visual album release that dropped Friday.