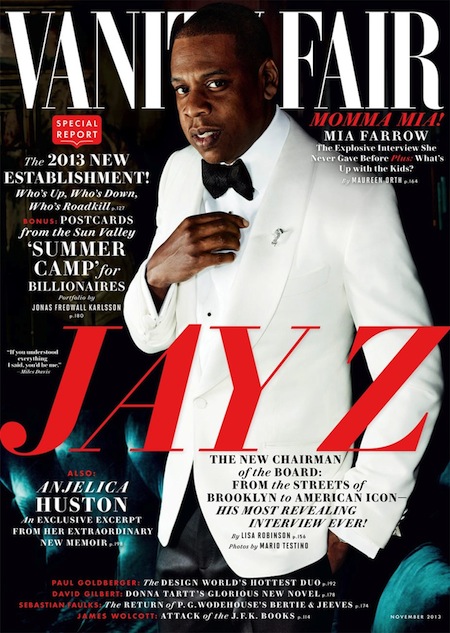 On rumors Blue Ivy didn’t like her mom’s music:
“That’s not true. She does like her mother’s music—she watches [Beyoncé’s concerts] on the computer every night. But my album came out and I don’t know if Blue ever heard any of my music prior to this album—she’s only 18 months old and I don’t play my music around the house. But this album was new, so we played it. And she loves all the songs. She plays a song and she goes, ‘More, Daddy, more . . . Daddy song.’ She’s my biggest fan. If no one bought the Magna Carta [album], the fact that she loves it so much, it gives me the greatest joy. And that’s not like a cliché. I’m really serious. Just to see her—‘Daddy song, more, Daddy.’ She’s genuine, she’s honest, because she doesn’t know it makes me happy. She just wants to hear it.”

On Beyonce and how he wooed her
“Jay says that when he and Beyoncé were both featured on the cover of Vanity Fair’s 2001 Music Issue “we were just beginning to try to date each other.” Try? “Well, you know, you’ve got to try first. You got to dazzle . . . wine and dine.” He tells [writer] Robinson that “of course” he pursued Beyoncé, and when asked if he hadn’t been Jay Z—say, he had been a gas-station attendant and she pulled up—would he have been able to date her, he responds, “If I’m as cool as I am, yes. But she’s a charming Southern girl, you know, she’s not impressed. . . . But I would have definitely had to be this cool.” Jay confirms that the line on his latest album, “She was a good girl ’til she knew me” is about Beyoncé, and when Robinson asks if she’s not a good girl anymore, Jay laughs, saying, “Nah. She’s gangsta now.””