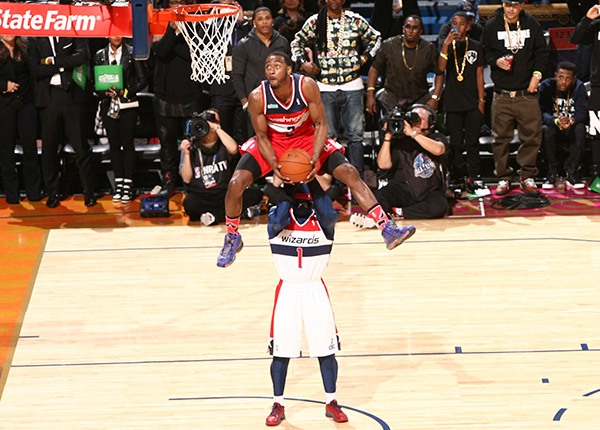 Here is a recap for any who missed it last night, the NBA took a new approach with the slam dunk contest on NBA All-Star saturday night having the Eastern/Western conferences go head to head in a dunk off. Leaving the lone slam dunker of the night award to be voted by the fans, Washington Wizards guard John Wall took home the honors of the 2014 Sprite Dunker of the night after jumping over the Wizards mascot G-Man and doing an impressive double-pump reverse slam dunk!

And after a slow start in the contest, San Antonio Spurs guard Marco Belinelli beat Kevin Love, Damien Lillard and Steph Curry in the west to advance to the finals where he would beat Washington Wizards guard Bradley Beal to become the 2014 Foot Locker three point shootout champion. Check out footage of Marco Belinelli during the event below..