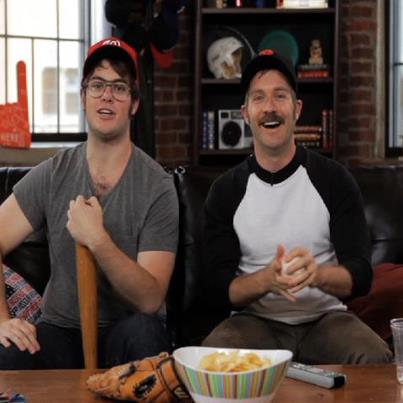 Sunday October 11 For the First Time Ever, Audiences will be able to affect a Live Broadcast in Real-Time via Twitter

To star in the daily “Rivals Live” online show, New Era has enlisted the support of comedic duo Matt Lusk and Kurt Ela, two die-hard baseball fans, who will represent the nation’s favorite rival teams during the MLB playoffs. Through the use of Twitter hashtags, fan sentiment will be directly transferred to the pair who will duke it out on behalf of proud fans everywhere.

We’ll have two fans representing rival teams in real-time via Twitter, facing off at the mercy of our audience. Viewers can vote for predetermined hashtags and our comedic duo will have to rise to the challenge – whether it’s receiving an atomic wedgie, or taking a shot of hot sauce.

Viewers will use predetermined hashtags to vote for challenges and to specify which of the rivals will have to do each challenge. Whether a host will receive an #AtomicWedgie or have to become a #ManOLantern, viewers will have the opportunity to select from a variety of hilarious pranks and stunts as the hosts battle it out for ultimate bragging rights. RivalsLive.com will track and display hashtag votes in real-time as they dictate the interactions between Matt and Kurt throughout the show.

The audience of “Rivals Live” will not only use social media to affect what goes on between Matt and Kurt in real-time, but can also communicate with the hosts through a live Twitter chat that will take place during the show. By using hashtag #RivalsLive, RivalsLive.com provides another outlet for expression and collaboration within New Era’s social media community.

“As social media continues to connect millions of people around the world, we wanted to take those connections one step further and provide fans an online setting to display their team pride and engage with the New Era brand like never before.”– Brian Wheeler, Senior Manager Interactive, New Era.

The Rivals Live campaign supports New Era’s MLB Authentic Collection (MLB AC) caps, the same as those worn on the field. To catch all of the action, please visit www.RivalsLive.com.