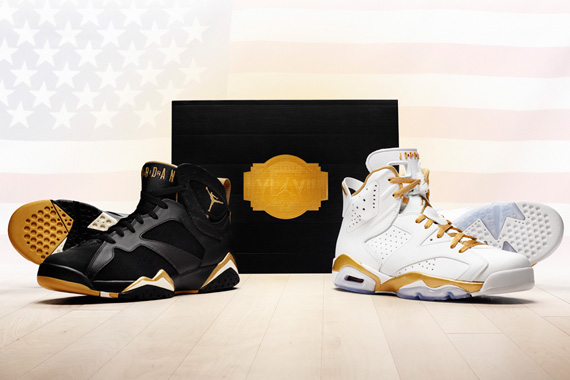 Oddly enough, when FIBA, the international governing body of basketball, announced professional basketball players’ eligibility to participate in the 1992 Summer Olympics at Barcelona, the American delegation actually voted against it. Fortunately, the proposal passed and led to the formation of the Dream Team. In celebration of the 20 years since Michael Jordan thrilled basketball fans around the globe as the anchor to the Dream Team’s dominance on the court, Jordan Brand is set to launch the Jordan Golden Moments Pack later this month.

Retail priced at US$ 350, the Jordan Golden Moments Pack will be available at select retailers on Saturday, August 18th. VIA FRESHNESSMAG.com

Previous « Would You Eat A $500 Sushi Platter Off A Model’s Body?
Next Trend Alert: Rag & Bone/JEAN Split Skinny Jeans »