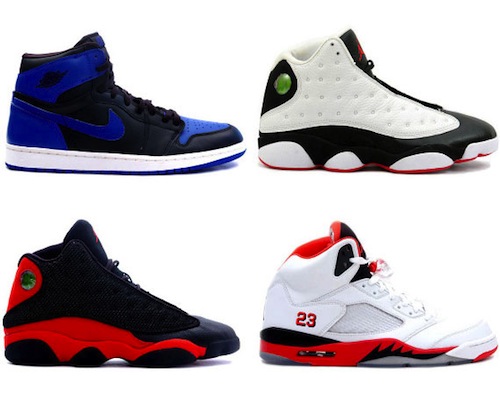 Which year will end up being the better one for Jordan Brand, 2011 or 2012? It’s an argument that sneakerheads love to debate. And for good reason. Some would consider those two years the best that Jordan Brand has to offer. And if that’s your opinion the correct answer is clearly in the eye of the beholder. But not so fast. Even though 2013 is still months away, today’s Spring preview may change a few minds with a fresh crop of Airs soon to come.

Air Jordan will highlight a few of their highly celebrated models in Spring of 2013. Jordan purist will be happy to see a resurgence of the AJ 13 in multiple colorways including Black/Red and White/Black. Additionally, the timeless AJ 1 drops in both Royal/Black and White/Red-Black colorways. The “Fire Red” AJ 5 will be highly sought after next Spring along with a yet to be named AJ3 as well.

Check out the preview of whats in store for Jordan Brand next Spring.

Previous « Ever Wanted To Party A Night In Miami With Diddy?
Next Drake Brings Out Dip-Set On His Club Paradise Tour In NYC »