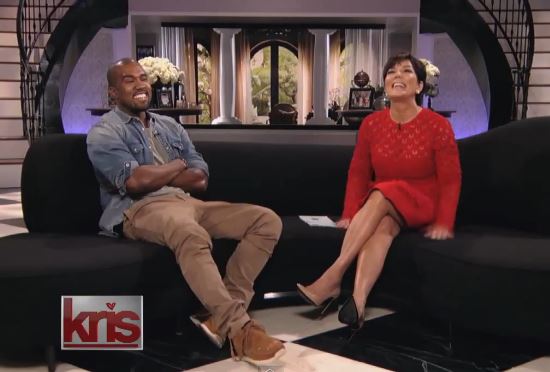 Kris Jenner show has been a hit this season, but the most anticipated show was the finale and the interview with Kanye West. During the interview Kanye gushed about how Kim and Nori has brought him joy since the passing of his mother.

Check out some highlights:

On Kim & Nori Being His Joy
I can have people saying this is going to damage your credibility as an artist or a designer, and I say I don’t care, I love this woman. When the paparazzi surround you — people know you don’t like paparazzi [and they say,] ‘Why would you be with this person?’ I’m being with this person because I love this person, and she’s worth it to me. My grandfather just passed and his whole thing, it was never about money. It was never about popularity. His whole thing was joy and having joy in his life. She’s my joy and she brought my new joy into the world. There’s no paparazzi and there’s no blog comment that’s going to take that joy from me.

I just dreamed about being next to her and…I don’t know. I don’t want to start jumping up and down on the couch or anything. *smiles*

Kanye also told Kris, while blushing, that he’s always “dreamed” of being with her daughter. ( I’m going to side eye that one)

Watch a clip from the interview: