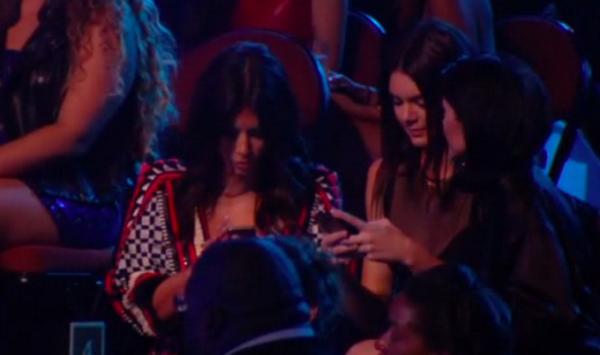 Kim Kardashian and her younger sisters, Kendall and Kylie Jenner, appeared genuinely uninterested in a moment of silence held in honor of murdered teen Michael Brown and the civil unrest occurring in Ferguson, Mo.

The famous sisters, 33, 18 and 17, respectively, were seen scanning their phones and chatting during the poignant moment led by rapper Common at Sunday night’s 2014 MTV Video Music Awards, reports BuzzFeed.

After making several remarks about the St. Louis suburb, Common asked everyone for their undivided attention. “I want us all to take a moment of silence for Michael Brown and for peace in this country and in the world,” he said.

The video camera then cut to the Kardashians who seemed to be more engaged in their own world. Twitter blew up in rage over their nonchalant actions.
While some users didn’t think too much of the Kardashians not focusing on the moment at hand, others labeled the sisters “selfish” and “self absorbed” for not fully participating in the moment.