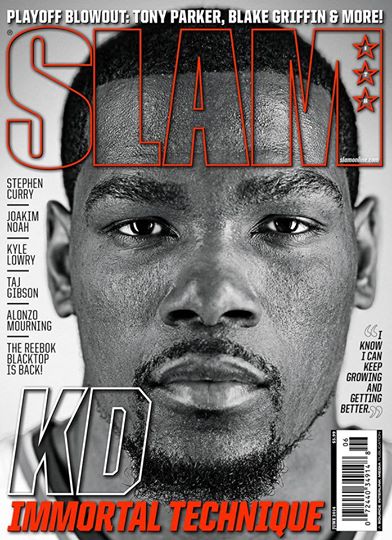 The latest Slam Magazine is on sale now. In his interview with Ryan Nelson starts with Durant describing his ridiculous 51-point performance in Toronto and how he loves to silence the court side hecklers. He continues with answers on what an MVP award would mean to him, his motto and whether or not there will be another player like him.

Durant joins Michael Jordan, Kobe Bryant and LeBron James as the only players to appear on the Slam cover with a close head shot.

Michael Jordan once scored 25 or more points in 40 consecutive games. Kevin Durant has now pulled off the feat 41 straight times, after dropping 38 points in the OKC Thunder’s 122-115 road loss to the Phoenix Suns on Sunday. Durant’s scoring streak is the longest since Oscar Robertson did it for 46 straight games in 1963-64. Wilt Chamberlain did it in all 80 regular-season games in the 1961-62 season.