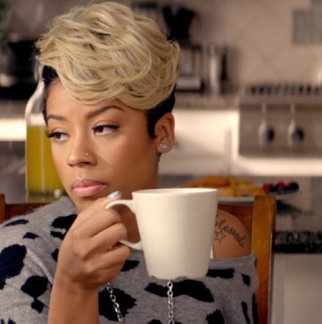 We all have our reservations about Michelle being part of Destiny’s Child, but I have never seen it taken to the point of blatant  disrespect. Keyshia Cole decided to throw a little shade on Twitter during one of the most anticipated pop culture events of the year, Halftime of the Super Bowl (aka Beyoncé Bowl). Destiny’s Child reunited during the Super Bowl halftime show on Sunday night for their first show in about eight years, and while fans were raving about it Keyshia Cole had something less-than-flattering to say about Michelle Williams, which really POed a lot of people.

Keyshia Cole first started out on a positive note, with her giving Beyonce props for owning the stage, writing, “F— that s— up then Beyonce! Bad bitch central #AllGirlEverything,” but then this happened: “I think I was frightened to blink for a sec. Then Michelle sung and woke my ass up from my daze! She always fuckN the groove up.”

That was very unnecessary and uncalled for being that Keyshia Cole is not the best singer and we all have some reservations about her screaming, I mean singing as well.

She wasn’t very apologetic about the comment as fans started to lash out, later adding, “But hey! I love y’all too! And y’all girl is WACK and always will be! #Boss!!”

Do you feel like Keyshia Cole was out of place? #speakonit in the comment section below.
Previous « Super Bowl XLVII Commercials
Next COMME des GARÇONS x Hermès “Comme des Carrés” Scarf Collection »