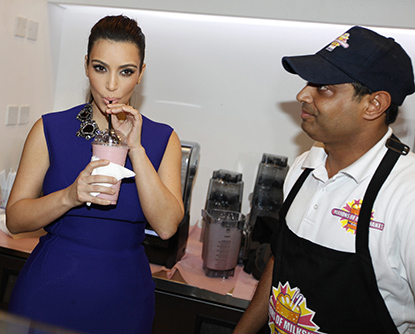 Kim Kardashian took a little heat in Bahrain for having…well…a bad reputation. Kim went to Bahrain to promote a milkshake franchise (Millions of Milkshakes, a franchise created and owned by businessman Sheeraz Hasan). When Kardashian arrived, 100 Sunni Salafists who protested with banners outside of the mall she was attending met her.

According to the local newspaper, her visit was not welcomed because she has a “bad reputation”.

Kardashian seemed unfazed by all the negative attention and thanked her fans for coming out to support her. Thousands of fans in Bahrain celebrated the reality television stars arrival, and her milkshake franchise.