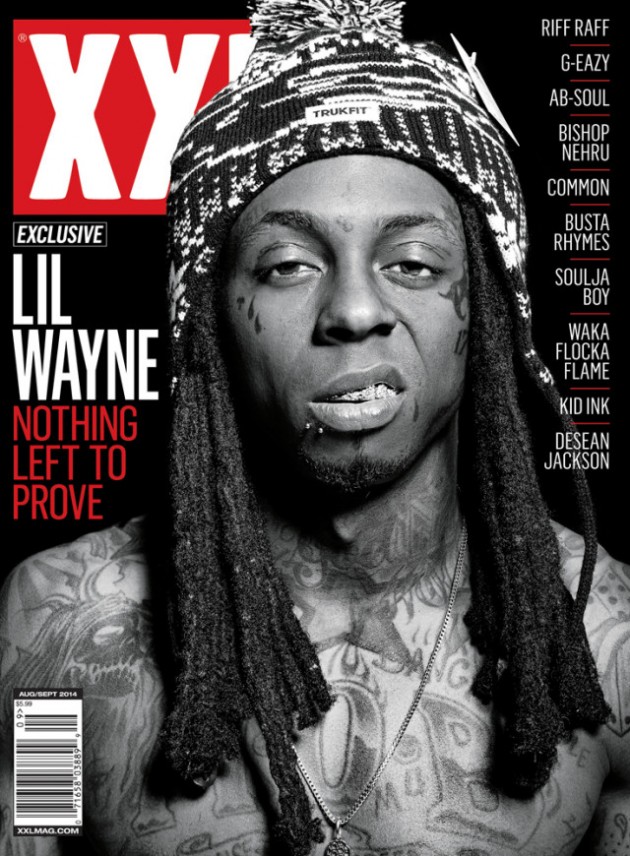 Lil Wayne returns to the cover of XXL for their August/ September 2014 issue. The feature isn’t available quite yet, but below are a few pull quotes.

ON AUTHENTICITY IN HIP-HOP:
“I know I’m authentic because I’m 35 million years in the game. I don’t know where the authenticity is in the game anymore. Today everyone sounds alike, they looking alike, they acting alike, they dressing alike. I came out when everybody was super different. You had an ODB. You had a Busta Rhymes and then you had a 2Pac. You had a Biggie. And everybody was different. Biggie was talking about Mob and Mafia shit. 2Pac was wylin’, talking about West Coast this and that. You had niggas like Meth and Red talking about how high they got and making people laugh. And then now, you got them, them. You got the categories and then everyone falls under it.”

ON PRINCE BEING HIS MAJOR MUSICAL INFLUENCE:
“It was the way he pronounced words and the way he used his voice. It was like if he was playing with a baby. You know if he was playing with a kid. [Imitates a baby cooing] It was the way that he was exploring it. He wasn’t doing it because it was funny. He was doing it because he could make it sound good and exceptional. I realized that I could do that too. He wasn’t afraid of how he sounded because he knew what he was saying and how he was saying it would always sound good.”

ON SIGNING DRAKE AND NICKI MINAJ:
“Call me old-fashioned and country, but with Drake, that was the first time I’d seen someone that knew how to sing and rap. That’s all it was. I didn’t know nobody who knew how to do that. You had those old school singing niggas, where people would do a little eight-bar verse on their songs. But [Drake] was spitting and singing and killing that too. It took a while though. It wasn’t until I heard him spitting on one of my beats when I was like, ‘This fool’s retarded.’ When I hear something that I know I can’t do better? That’s when I’m like, ‘They need to be on the team.’”
“I wanted a female. Every team needs a female to rep your gang. She was annihilating niggas. I mean males. I was like, ‘I have to beef my shit up on that muthafucka.’ She just knocked it out the park from day one. She’s just Nicki. I don’t know whose idea it was, but it was a good idea.”