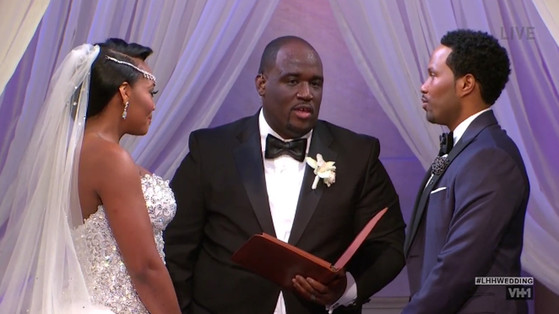 Love & Hip Hop stars Yandy Smith and Mendeecees Harris tied the knot in a live VH1 wedding on Monday, May 25 after eight years of dating. The entertainment executive and her music manager husband said “I do” in true New York style.

Yandy and Mendeecees have a lot of famous friends. Mob Wives’ Renee Graziano, Real Housewives of Atlanta’s Kandi Burruss and singer/songwriter Ray J were among the celebs who watched Yandy and her fiancé get hitched. The couple were also joined by friends and family, including their children, 2-year-old Omere and 4-month-old Skylar!

Yandy couldn’t decide between two $25,000 wedding dresses by Pnina Tornai, so naturally she got both. “I felt like the God of wedding dresses had opened their doors and welcomed me into the pearly gates of heaven,” the bride-to-be told cameras. Viewers voted to help Yandy pick a crystal-encrusted “bling princess” gown over a “royal queen” gown, and she looked stunning walking toward the father of her children.

Yandy and Mendeecees picked out fabulous wedding rings, and they didn’t come cheap. Mendeecees’ 5ct ring was $12,000, while Yandy’s 6.5ct stunner was more than double –– coming in at $30,000.

Mendeecees might have an ongoing criminal case to worry about, but that isn’t stopping Yandy from wanting to pop out more babies! “I want more kids,” she told her man. “I want to have two more children within the next year or two.” Mendeecees didn’t exactly feel the same way: “You know I still have this case over my head. It scares me because I don’t want to leave you to raise these kids all by yourself.”

Previous « Ciara is the New Face of Robert Cavalli (Photos)
Next New Music: Jermaine Dupri Feat. Bow Wow “WYA” (Where You At?) »