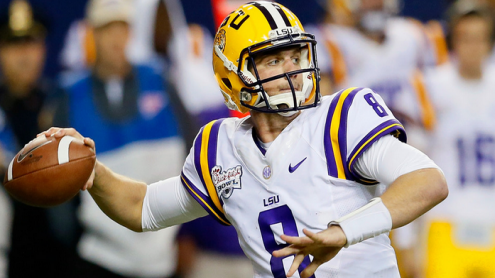 The Florida Gators head to Baton Rouge on Saturday to take on the LSU Tigers in what is essentially a playoff game. The Gators are led by Redshirt Junior Tyler Murphy who is only making the 3rd start of his career. Meanwhile the Tigers are still licking their wounds a bit from their lost to Georgia but did beat another bulldog last week to get back to their winning ways.

LSU took Mississippi St. to the woodshed and then turn their eyes on revenge. Last year the Bayou Bengals went down to the swamp and got physically handled by the grimey Gators. This year’s version of the Tigers are definitely better on offense but the inconsistent play on defense could lead to trouble at Tiger Stadium on Saturday. LSU is giving up over four yards a carry this year and 5.1 a rush in conference play.

Florida gets off the bus running the football. Led by Matt Jones, Mack Brown and Kelvin Taylor the Gators are gaining 4 yards a run and lean heavily on their 2nd ranked defense in the country. Loaded with talent and speed the Florida defense boast young and seasoned talent alike. Freshmen Corner Vernon Hargreaves, Junior Corners Loucheiz Purifoy and Marcus Roberson have the ability to shut down Odell Beckham and give Zach Mettenberger fits. The Gators have monsters in the front seven also. Dante Fowler, Antonio Morrison and Ronald Powell led a group of hard hitting, aggressive group of Defensive Linemen and Linebackers.

This one will come down to coaching and Florida has a decided advantage in the Head Coach department but LSU appears to win everywhere else. Meaning if LSU plays to their full potential all 60 minutes they will run away with this one. They won’t and it’ll be close late and Les will find a way to give the resilient Gators too many chances and BOOM!!!

All pictures and logos are courtesy of the NCAA, SEC, CBS, NBC, ABC, FOX, YAHOO,